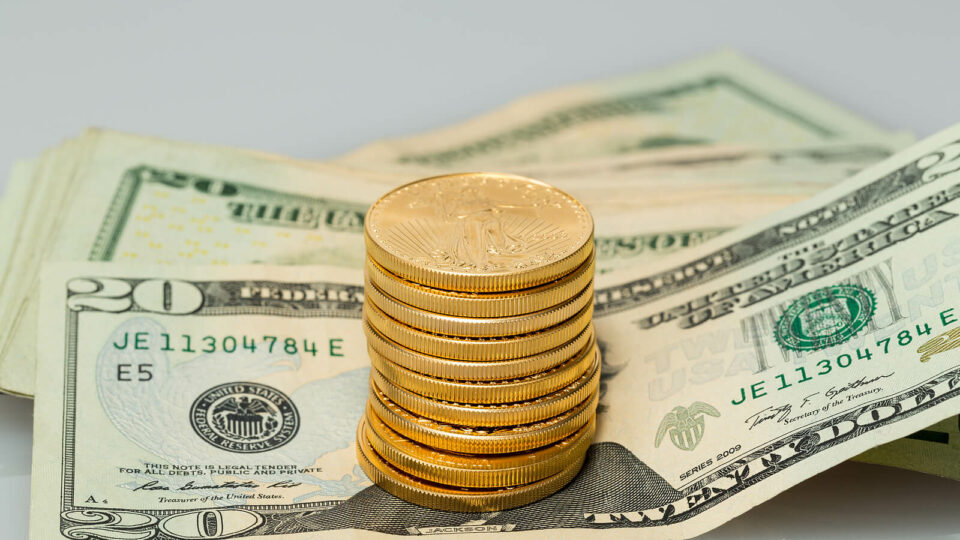 Gold needs a catalyst to jump out of the $1,800 zone, and U.S. dollar weakness might be the answer.

Golden Cross on the way

The gold price, its 200-day moving average, its 50-day moving average have all converged between $1,790 and $1,820. The price has been trapped inside this zone all summer, apart from the flash crash and subsequent rebound in August.

The 50-day moving average is on track to cross the 200-day moving average in the next couple weeks, which would form a bullish signal known as the “golden cross.” This signal, added onto September’s seasonal strength, could be enough to push the price above its $1,837 resistance. 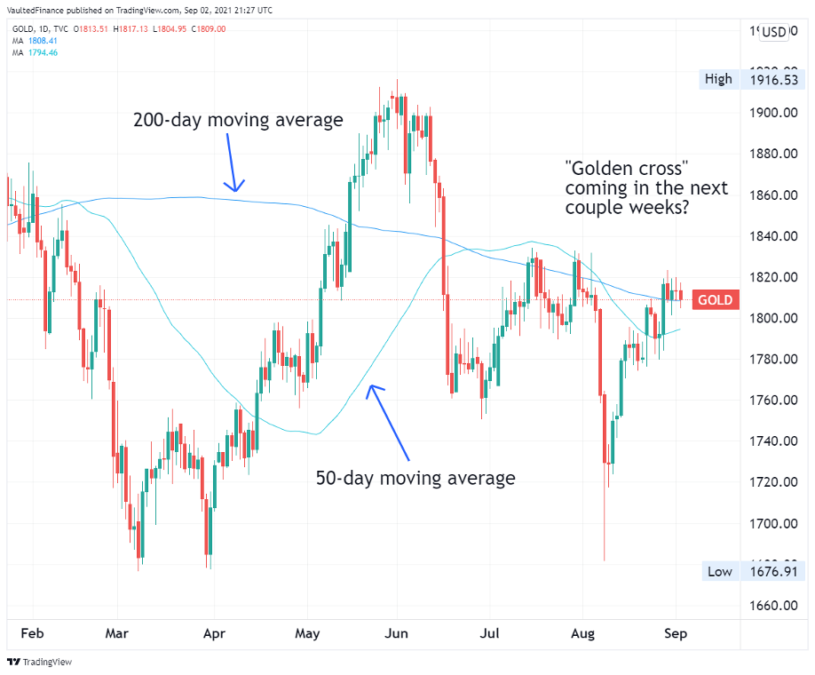 Gold has put in a series of solid higher highs since the August bottom but has yet to challenge any major resistance levels. According to the Relative Strength Index (purple line on the chart below), gold’s momentum has been rising but still has room to run.

Ideally, we would like to see gold come down and touch support before making another run at $1,837. 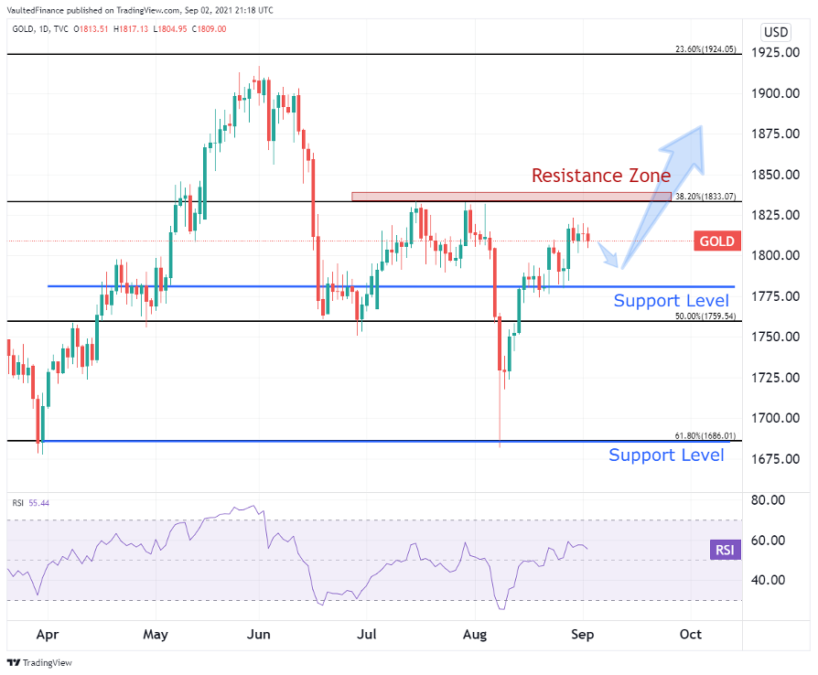 Goldman Sachs predicts the U.S. dollar has run its course

This week, investment banking giant Goldman Sachs released a report with a neutral-to-bearish outlook on the U.S. dollar Index. Their predictions focus on the Fed’s discussions of “tapering,” or reducing its $120 billion monthly purchases of government bonds.

The Fed has been weighing the tighter monetary policy, which would theoretically strengthen the U.S. currency but damage economic recovery (and the high-flying stock market). According to Goldman Sachs, the impact of tapering has already been priced into the currency. Even if the Fed does tighten monetary policy, the decision may not strengthen the dollar.

This news is great for gold, because the dollar index has a strong negative correlation with the gold price. Gold is priced in U.S. dollars, so when the dollar index rises, gold gets more expensive for foreign investors (therefore decreasing demand). The report predicts that the dollar’s strong performance in 2021 will start to slow down. 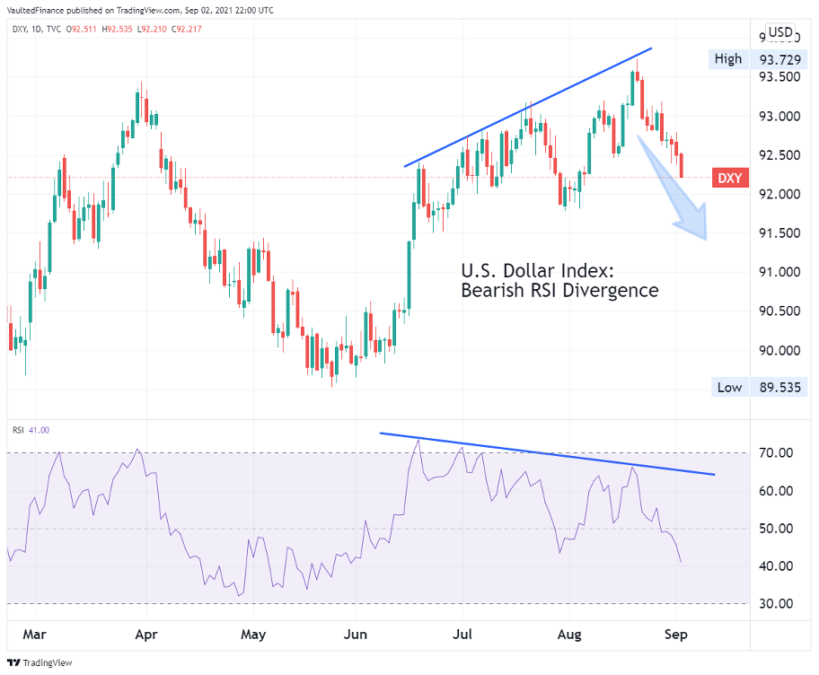 A technical analysis of the U.S. dollar index confirms Goldman Sachs’ prediction. Since mid-June, the index has been putting in higher highs while the RSI puts in lower highs. This is known as “Bearish RSI Divergence,” and usually signals a reversal.

The United States’ exit from Afghanistan also seems to be hurting the dollar (if not in the short-term, certainly in the long-term). In the decision to end its 20-year war in the Middle East, the United States made a massive geopolitical statement that will ripple through international relations for decades. Many American allies, especially those in Europe, are extremely frustrated by the United States’ handling of the situation.

The Afghanistan exit is a large step away from the Bretton Woods tradition. After WWII, the Bretton Woods system tied every currency to the U.S. Dollar, which was tied to gold. In exchange for this massive economic advantage, the United States was responsible for keeping the world’s oceans safe, facilitating global free trade, and essentially serving as the world’s policemen.

As the United States loses interest in this responsibility, central banks will look for alternatives to the U.S. dollar, which has served as the world’s primary reserve currency for most of modern history.

International Monetary Fund data reveals that the U.S. Dollar share of central bank reserves has fallen to a 25-year low. In the year 1971, the Dollar made up more than 85% of foreign exchange reserves. In 2000, that number had dropped to 70%. Now, central banks only hold 59% of their reserves in the U.S. dollar.

It is not easy to find a suitable replacement. The U.S. dollar seems to be the most stable fiat currency in existence, even today.

However, gold seems to be filling the role nicely. Central banks have been ramping up their gold purchases since 2000 and holding gold as a reserve asset. As the U.S. dollar has lost ground, gold has gained.