Gold vs. Bitcoin: Where Should You Put Your Money? - Vaulted 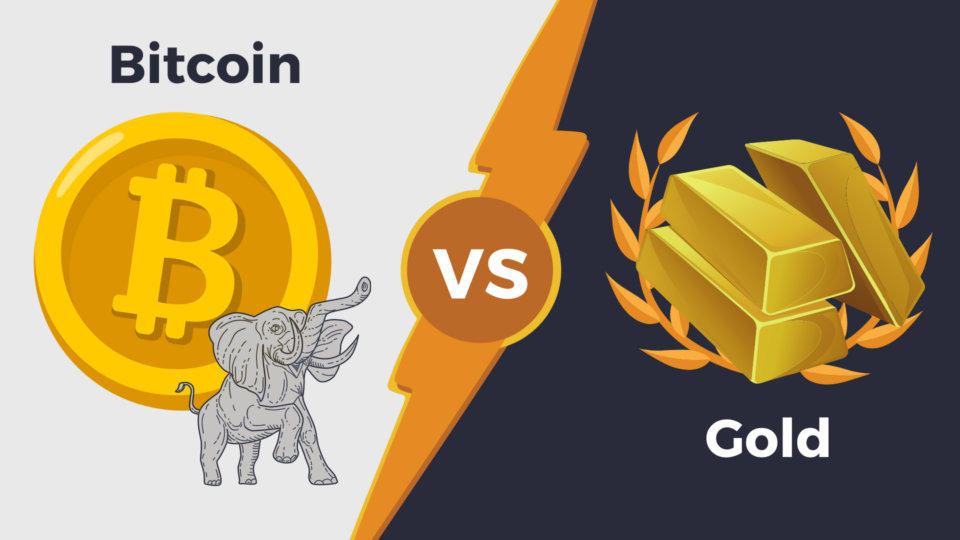 Everything you need to know about the two top choices for hedging against fiat currency, and how to take advantage of the forces driving this legendary battle.

Some say the rise of cryptocurrency challenges the time-tested yellow metal as the top choice for hedging against fiat currency. The “gold vs. Bitcoin” debate, though entertaining, distracts from the bigger questions we should be asking: Why do we need alternative currencies? How does crypto bring light to the structural issues plaguing the world’s monetary system? How do I protect my wealth?

Carthage vs. Rome; Bitcoin vs. Gold

In 218 BC, Hannibal of Carthage marched his army of men, cavalry, and war elephants through the Alps to attack Rome on its own soil, launching one of the greatest military feats in history and laying the groundwork for an equally great “underdog” allegory for challenging the incumbent.

If cryptocurrency is the Carthage of our modern financial world, gold is the Roman Empire. Cryptocurrency is marching across the treacherous financial system in a daring campaign to take its place as the authority of money. Bitcoin owns none of the elephants but all of the risk, and will likely suffer massive losses before the attack on gold can even begin. The question is, which asset will prevail?

The case for Bitcoin is clear. The technology is revolutionary. Bitcoin’s adoption rate has steadily increased since its inception, thus de-risking the mysterious asset. It is hard to ignore Bitcoin’s mind-boggling returns. Everyone is kicking themselves for not investing when Bitcoin first started making headlines. Although, that’s like kicking yourself for not buying the winning lottery ticket.

The hype surrounding crypto has pressured individuals to frantically buy into a technology they do not understand at extremely high valuations. This kind of speculative behavior has made some people very rich, but has also destroyed the wealth of those unlucky enough to catch the top of the market. Volatility is volatility. It is difficult to rewrite the rules of finance.

People should be wary of idolizing the underdog, lest we forget that Rome won the Punic Wars, forcing the Carthaginians out of Europe and establishing ultimate sovereignty over the Mediterranean for another 500 years. Pitting Bitcoin against gold makes for an exciting topic of conversation, though it misses the point. We cannot let the battle between alternative currencies distract from the common enemy – the underlying forces that will continue to push both assets into the spotlight over the next few years.

Why should we care about alternative currencies?

Modern economies function on a fiat currency system. Fiat currencies have no intrinsic value, instead deriving their worth exclusively from a government promise. Without any physical backing, governments have the freedom to print their currency to their hearts’ content.

Governments employ central banks to control the money supply and interest rates. As you can imagine, controlling the most important aspect of an economy, money, is an impossible task – which is why central banks have such a terrible track record. The U.S. dollar has lost 98% of its purchasing power since the creation of the Federal Reserve in 1913. 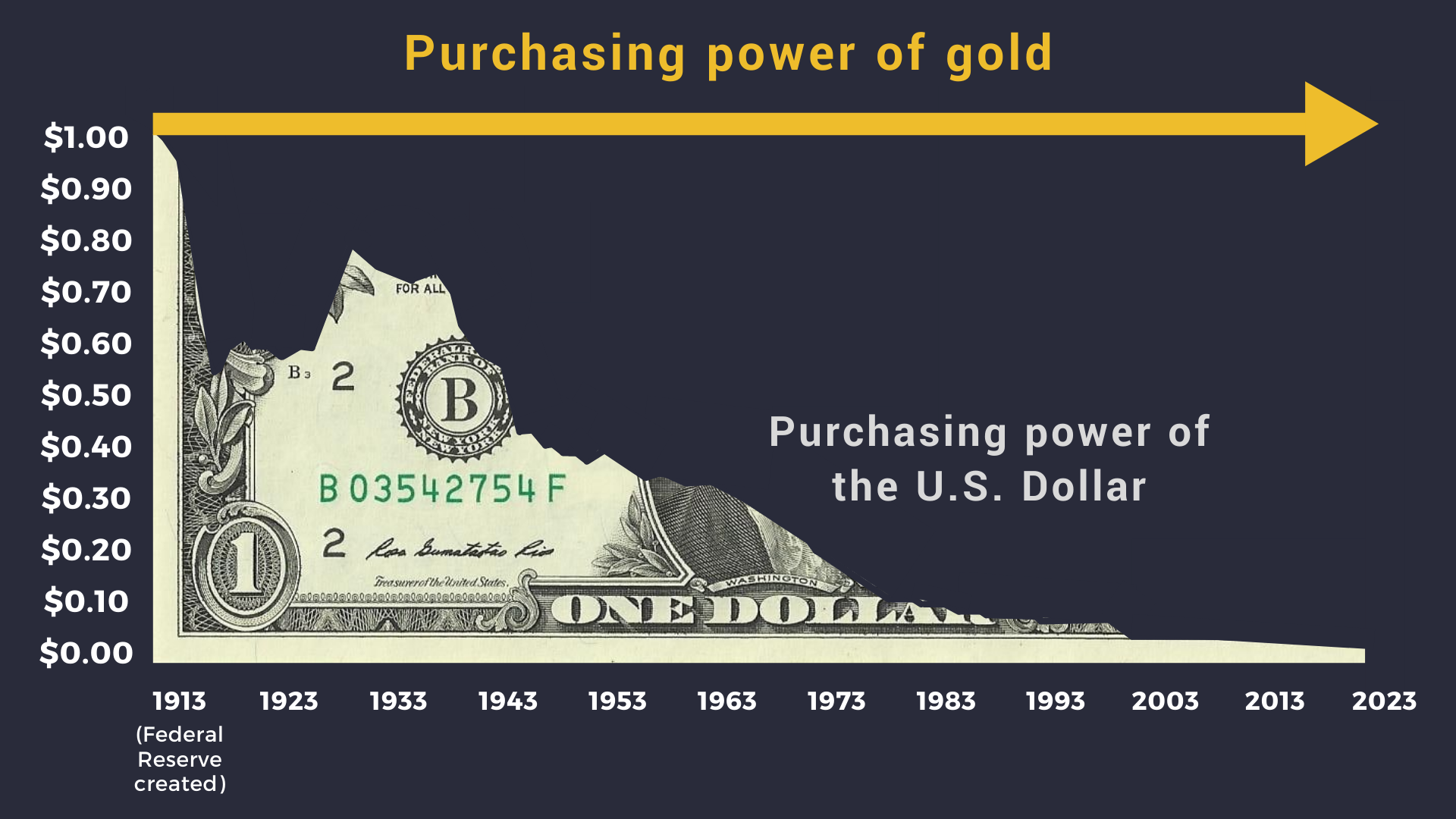 History is full of reasons to hedge against fiat currency. Of the hundreds of fiat currencies that have existed throughout history, few have survived longer than 100 years. Most have failed due to hyperinflation, war, or monetary mismanagement by the government.

Is the U.S. dollar any different?

From a fundamental standpoint, no. When Nixon removed the United States from the gold standard in 1971, the Dollar lost all remnants of scarcity. Scarcity is what makes something valuable – that is the entire purpose of money. When the government has complete control over the money supply, they tend to crank the money printers to 11, devaluing their own currency to pay off debts or inject credit into the economy.

Ballooning budget deficits, ultra-low interest rates, and free money hace characterized the global economy since 2008. These factors have contributed to unprecedented growth in the stock market and other risky asset classes. Unfortunately, interest rates can only go so low, debt can only go so high, and money printers can only run so fast. We have seen this pattern time and time again throughout history, and the common citizen always loses in the end.

Investors are aware of this problem, which is exactly why gold and cryptos are heating up. Everyone knows the current monetary system is wrought with structural instability. Investors want to reclaim control and pave the future of money.

A Deeper Look into Gold

Nearly every developed culture throughout history has used gold as a source of monetary exchange or a symbol of prosperity. Humans have been recovering gold from riverbanks, veins, and ore deposits on every continent (except Antarctica) for thousands of years. Humans ascribe value to the yellow metal for several reasons:

Modern investors are interested in gold’s unique characteristics as a portfolio diversifier and storage of wealth. Portfolios with a gold allocation have historically provided higher returns with less drawdown and lower risk.

A Deeper Look into Bitcoin

Bitcoin started making headlines in 2009 when an anonymous person (or group of people) named Satoshi Nakamoto launched a new system of digital currency. Here are some key terms in the cryptocurrency universe:

Bitcoin was not the first digital cash technology, and is far from the last. Tens of thousands of cryptocurrencies currently exist, although Bitcoin is the clear leader in terms of market capitalization and trading volume.

Gold and Bitcoin are both positioned to deliver superior returns, liquidity, and protection against fiat currencies. They both allow investors to “exit the system,” with an asset that the banks and government can’t touch. However, the assets differ in major ways.

We could dive into other aspects of a healthy currency, such as fungibility, divisibility, portability, and supply limitations. Both assets qualify for all these characteristics.

Investors need to know that gold and Bitcoin serve very different strategic roles in a portfolio. Gold is a hedge. Investors turn to the safe haven when things look unstable. Bitcoin, on the other hand, behaves like a risk asset, generating massive returns when the economy is doing well and crashing when the economy struggles. For this reason, Bitcoin tends to be correlated with the stock market.

Strengthened by the past, prepared for the future

Perhaps the battle between Bitcoin and gold will help investors move past the conception of price as an objective measure of value. Too often, investors exclusively analyze asset prices, ignoring important measures of value such as exchange rate and ratios between assets.

Price is simply comparing an asset to the value of a fiat currency, which limits our ability to understand how a particular asset is performing in the grand scheme of things. Fiat currencies are a poor benchmark for measuring value, and the sooner we move past them toward a more democratized monetary future, the better.

Diversify your exposure against fiat currency. Gold and cryptocurrencies will both play a vital role in protecting the financial future of those daring enough to invest in a new monetary system – one strengthened by the past and prepared for the future.