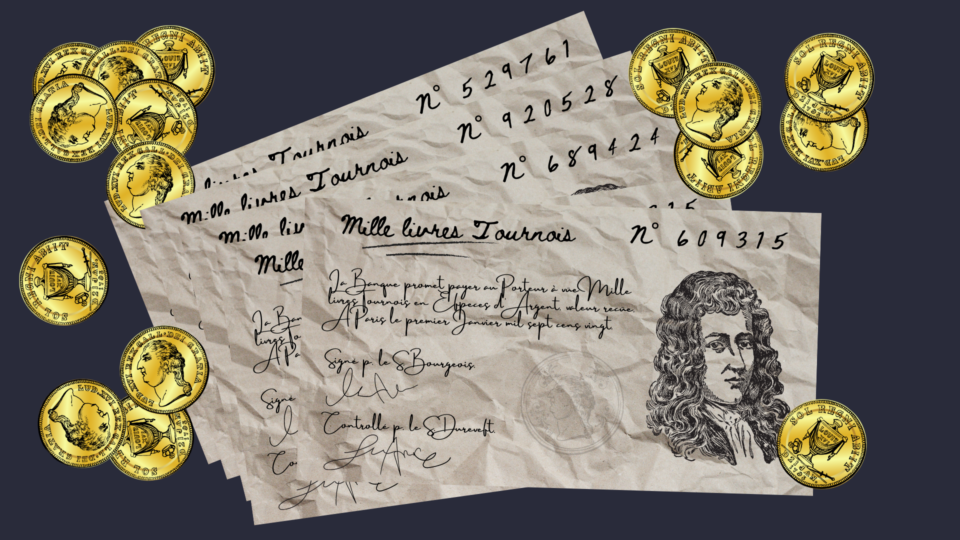 If you happened to be walking around Paris from 1715 to 1722, you would have encountered one of the first experiments with centrally planned banking, paper money, and fractional reserves.

As you might guess, the experiment ended in disaster. In just a few short years, you could have observed the boom and bust cycle resulting from a transition from hard money (gold and silver) to easy money (paper currency and banknotes).

John Law to the Rescue

Let’s travel back to 18th century France. When King Louis XIV died in 1715, he left the French economy in shambles. His reckless spending on the Palace of Versailles and the Franco-Dutch War had depleted the nation’s monetary reserves, forcing the government to take on exorbitant debt.

He left a legacy of high taxes and a sluggish economy. France needed help, and they found it in a Scottish economist named John Law. Law had spent decades traveling and studying the monetary systems of Europe. When French royalty called for his assistance, he introduced a revolutionary idea: paper currency.

The Move to Easy Money

Prior to Law’s influence, France functioned on a hard money system of gold and silver coins. The government had little to no influence on the money supply. That changed when John Law created the Bank Generale in Paris, which issued paper currency for public use.

At first, these banknotes were backed by physical gold and silver. But, as demand for paper currency grew, the Bank Generale couldn’t resist the urge to keep printing and distributing banknotes. John Law knew these notes needed some sort of backing, and saw an opportunity in the New World.

In August 1717, Law formed the Mississippi Company, which managed trade between the mainland and France’s colony along the Mississippi River. This colony stretched from modern-day Louisiana all the way up to Canada. The company transported settlers and slaves, appointed government officials, and managed trade in the territory.

To fund his operations, Law started selling shares of the company. Rumors spread of silver and gold in the Mississippi territory, and investors lined up to finance the enterprise. French citizens were eager to exchange their new banknotes for stock. Keep in mind: Law’s bank was creating the money which citizens then invested in Law’s company. Law also traded company shares for government bonds, eventually acquiring a large percentage of France’s debt.

Mississippi Company share value skyrocketed. In 1719 alone, the share price rose almost 2,000%. This tends to happen when a company has access to unlimited money. The Mississippi Company created new millionaires every day as more and more investors clamored for a piece of the pie. Even working-class citizens were sucked into the craze, investing every livre they had into the company (livres were the French currency at the time).

In January 1720, everything changed. Investors started cashing in their capital gains and the share price stalled. Investor sentiment shifted from risk-on to risk-off and everyone started trading their paper money back to gold. But there was a problem: Law’s bank had printed 5 times the amount of paper money than it had in gold reserves.

John Law saw the writing on the wall. Gold coins were the one branch of France’s monetary system he could not print or control. In an effort to stop the transition back to hard money, the French government restricted the use of gold as a medium of exchange and made Law’s banknotes legal tender. Citizens were now forced to pay taxes and settle debts with paper money rather than gold and silver.

Inflation skrocketed, reaching 23% in early 1720. Food prices doubled. Mississippi Company shares devalued rapidly alongside the French currency. By September 1721, the share price had dropped to 500 livres (down from 10,000 livres just two years prior).

John Law’s genius quickly turned into his worst nightmare. His scheme turned peasants into millionaires and back to peasants in a matter of months. He fled Paris soon after the collapse, leaving France’s economy even worse than it had started. Law died a poor man in Venice in 1729.

France soon switched back to a gold-backed currency system, which helped stabilize the economy. However, citizens held onto their frustration with French royalty, eventually culminating in the French Revolution in 1789.

A Mirror to Modern Money

The Mississippi Bubble is just one example of the easy money trap, to which countless nations have fallen victim. The livre set an example that the German Papiermark (1923), Hungarian pengő (1946), Yugoslav dinar (1994), Zimbabwean dollar (2008), Venezuelan bolivar (2018), Argentine peso/austral (1989), Chinese yuan (1949), Greek drachma (1944), Peruvian inti (1988), Russian ruble (1992), Angolan kwanza (1996), Turkish lira (2022), and many other fiat currencies would follow. In fact, the majority of fiat currencies throughout human history have been destroyed by hyperinflation or war. And yet, John Law’s ideas live on in modern economic thought.

Perhaps most frightening is the fact that the Bank Generale’s operations mirror the strategies of modern central banks. Here are some policies that the United States Federal Reserve shares with the Bank Generale:

The transition from hard money to easy money is not a new experiment. Does this mean the United States is doomed to the same fate as 18th century Frace?

Certainly not – as long as the U.S. maintains a certain level of “hardness” in the U.S. dollar. Unfortunately, the Great Financial Crisis triggered a strong move away from sound monetary policy. Since 2008, the Fed has engaged in unprecedented levels of accommodative monetary policy through quantitative easing and near-zero interest rates.

Warning signs are flashing: extreme speculation in the stock market, unsustainable government debt, rising inflation (to name a few). Luckily, modern investors are in a better position than investors in 18th century France. They have tools to prepare for any sort of bust central bankers might trigger during their relentless pursuit of the boom.

We hope Vaulted can serve as one of these tools. Vaulted allows you to create your own gold standard by acquiring physical gold at the best cost structure in the industry. We handle storage and insurance – all you need to do is sit back and watch your investment grow.