A Comprehensive Guide to Money Creation (for Visual Learners) - Vaulted 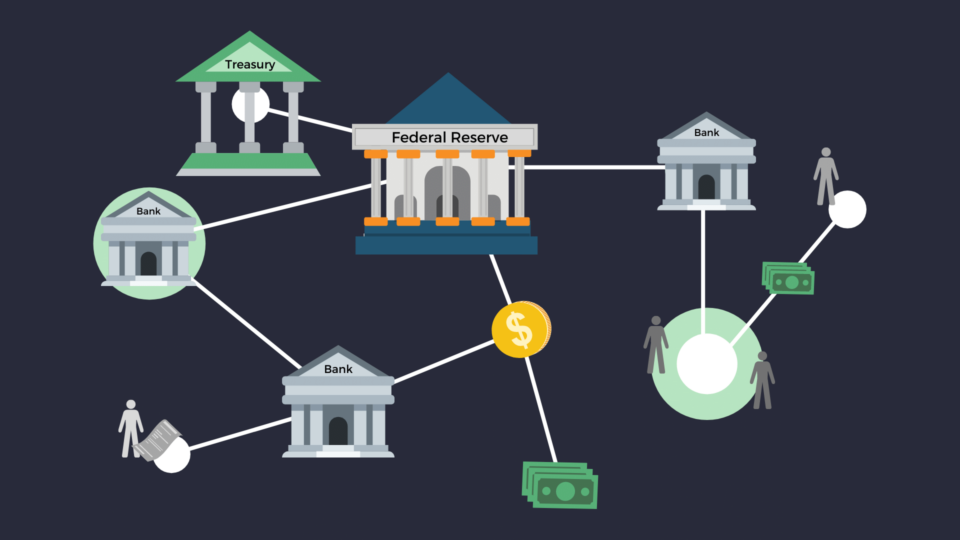 How the government, central bank, and commercial banks work together to create money.

To understand modern money, we must first understand the four different entities involved:

We also must understand the structure of assets and liabilities for each institution. Each entity has a unique balance sheet construction. 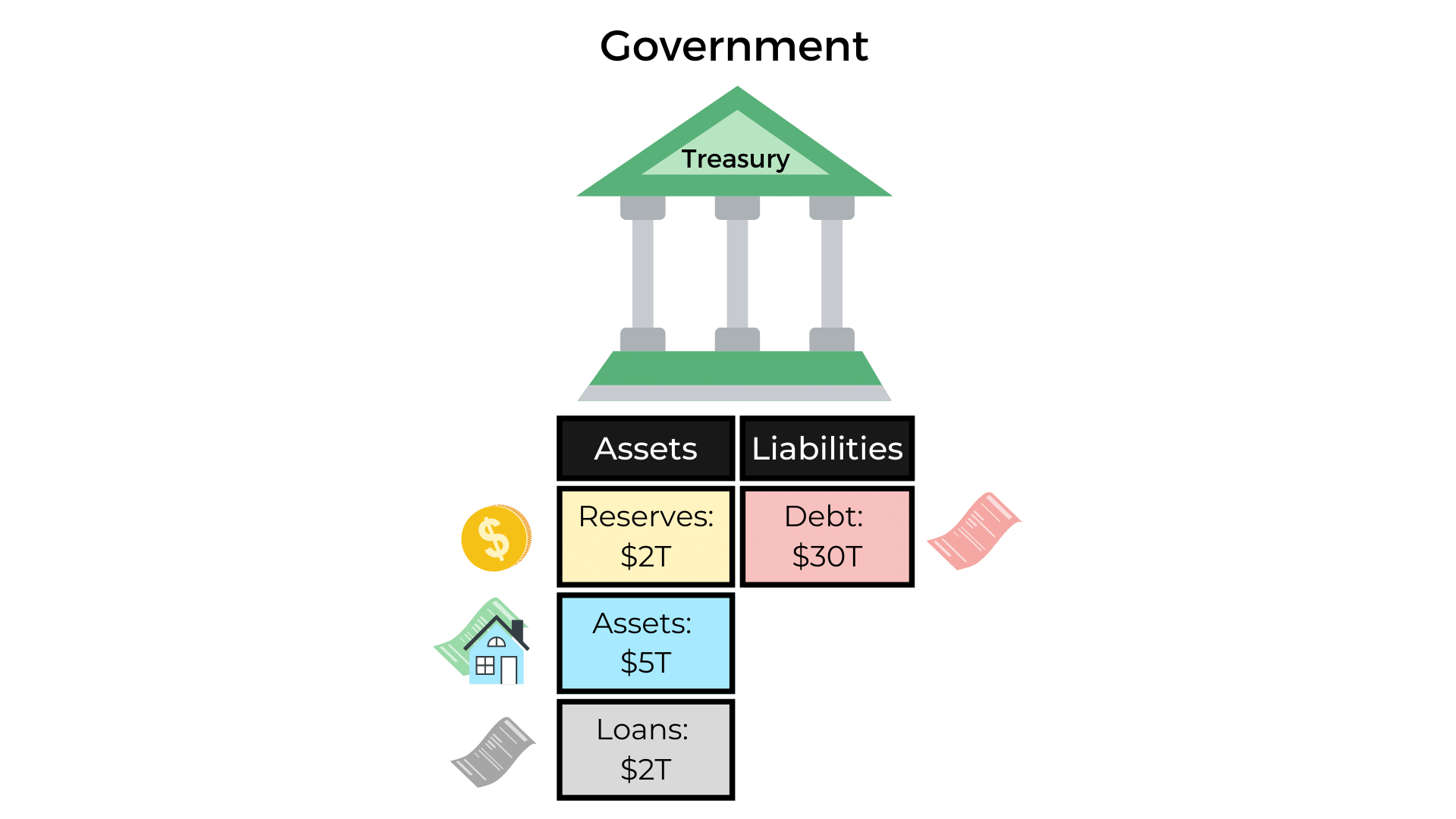 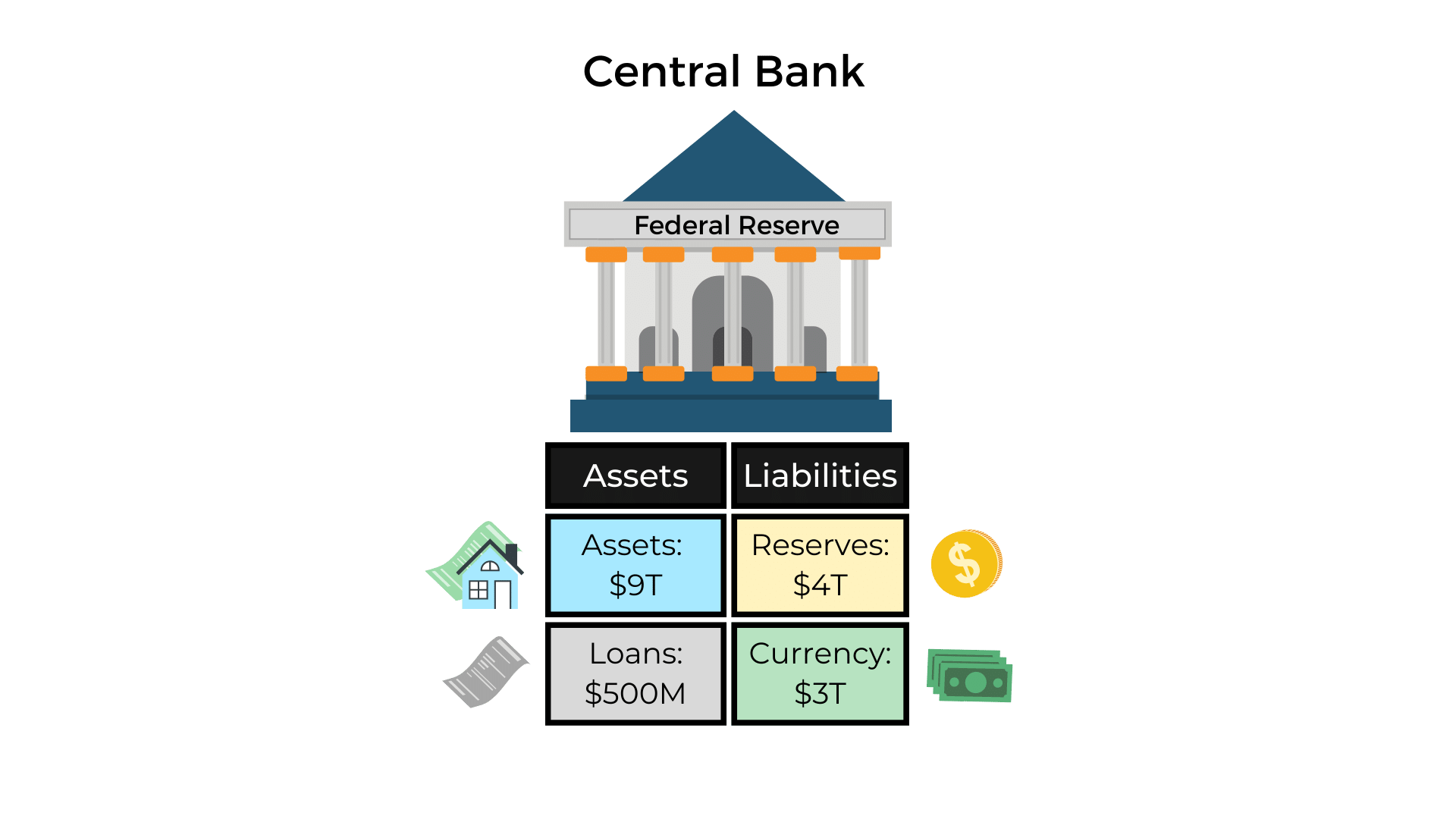 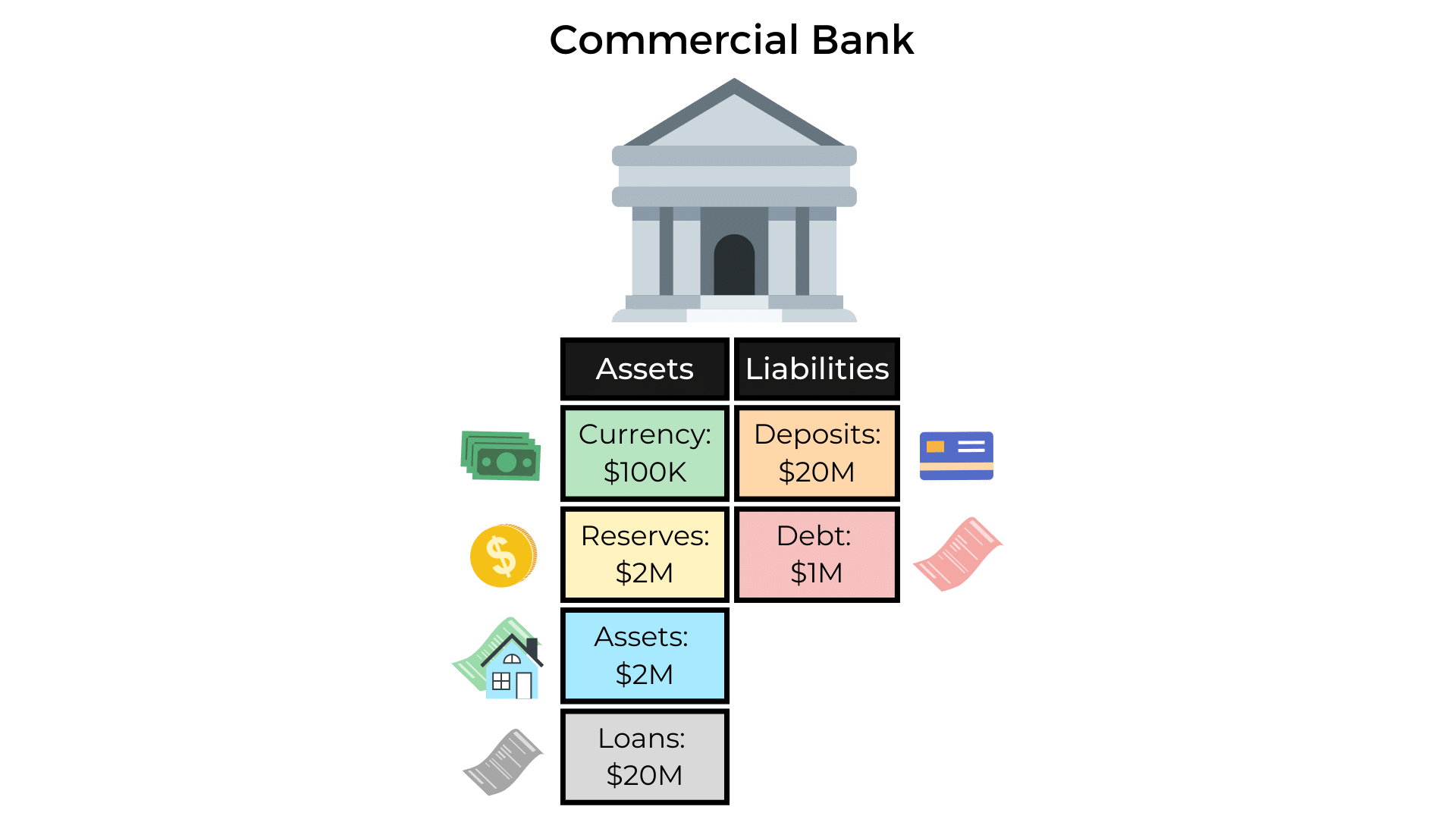 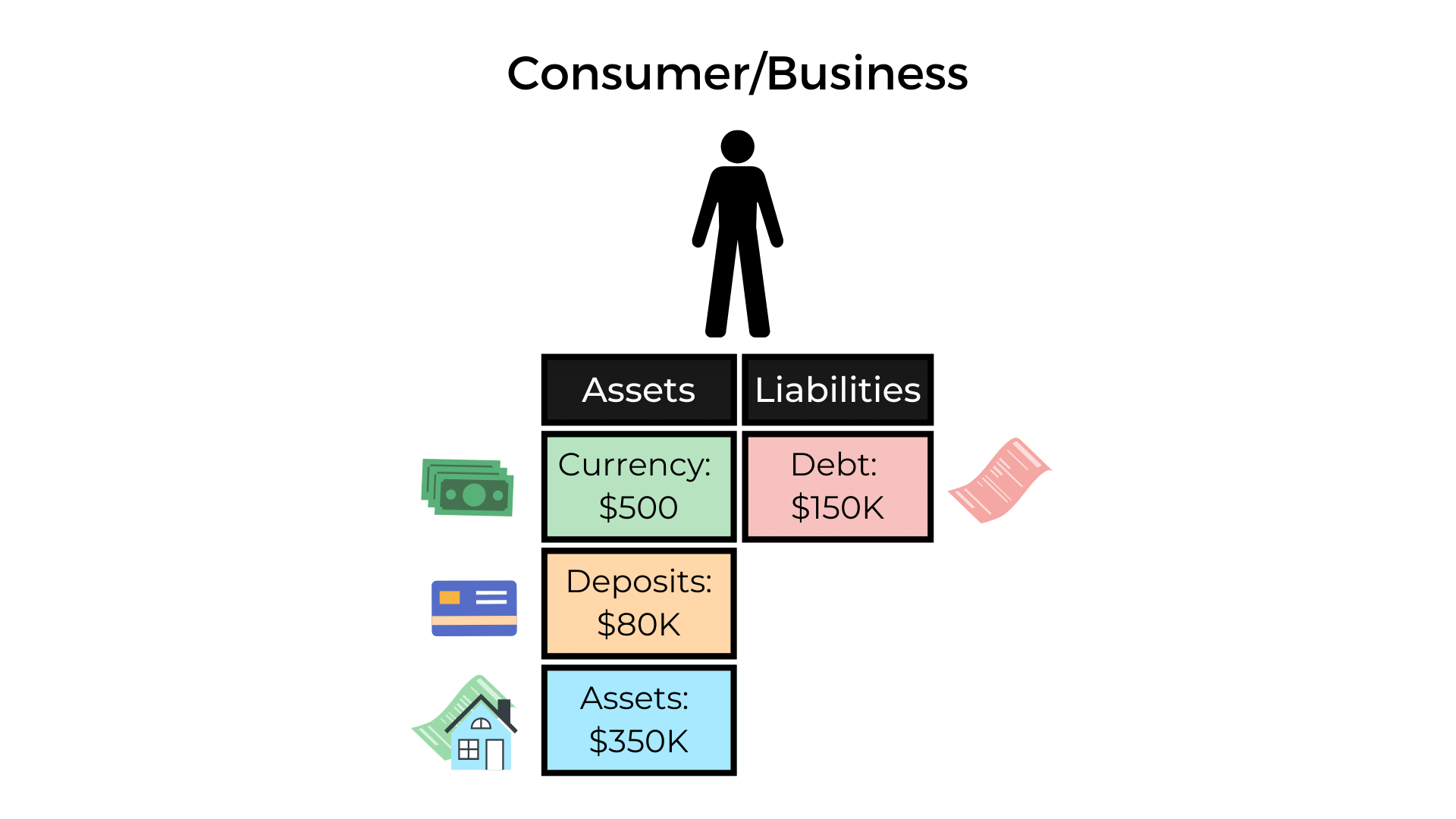 The figures below are indicative of the U.S. economy.

Currency refers to physical banknotes and coins. Physical cash only makes up a small portion of the money supply. Most money exists in the form of credit.

Deposits refer to funds that consumers and businesses hold in their bank accounts. Deposits spend like currency but only exist on a computer screen. At any time, deposits can be withdrawn from the bank and turned into physical currency.

Reserves are a special kind of deposit held at the central bank. Only the federal government and commercial banks can hold reserves. Central banks manage the total supply of reserves available to the banking system. The Fed usually increases reserves by loaning money to commercial banks or purchasing assets in the open market.

Some assets correspond with a liability. For example, a consumer may own a house and have a mortgage. The liability also may be on someone else’s balance sheet. For example, the Federal Reserve holds treasuries and mortgage-backed securities, which are backed by government or consumer debt. Other assets have no corresponding liability. If an investor buys a bar of gold with cash, the asset is not connected to someone else’s liability.

Loans refer to a contract between a lender and a borrower. The borrower is expected to pay the lender back with interest. Commercial banks give out loans to consumers and businesses. Commercial banks with excess reserves may also loan money to other commercial banks that are short on reserves through the interbank lending market.

The central bank gives out loans to commercial banks. These loans increase drastically during times of financial stress, such as the Global Financial Crisis and COVID-19.

Commercial banks give out loans to consumers and businesses. The government also gives out business loans and student loans.

How Money is Created

The following model demonstrates how financial institutions exchange assets and liabilities to create money. In this example economy, there is one central bank, three commercial banks, and four consumers/businesses.

The institutions are divided into three categories: the government (Treasury) and the central bank (Federal Reserve) on top, commercial banks in the middle, and consumers and businesses on the bottom.

To start, we will assume there is $220 in circulation. To calculate the amount of money in circulation, we add currency held by the public and total checking deposits (the definition of M1 money supply).

We will also assume there is $360 of total debt, split between all the financial entities. 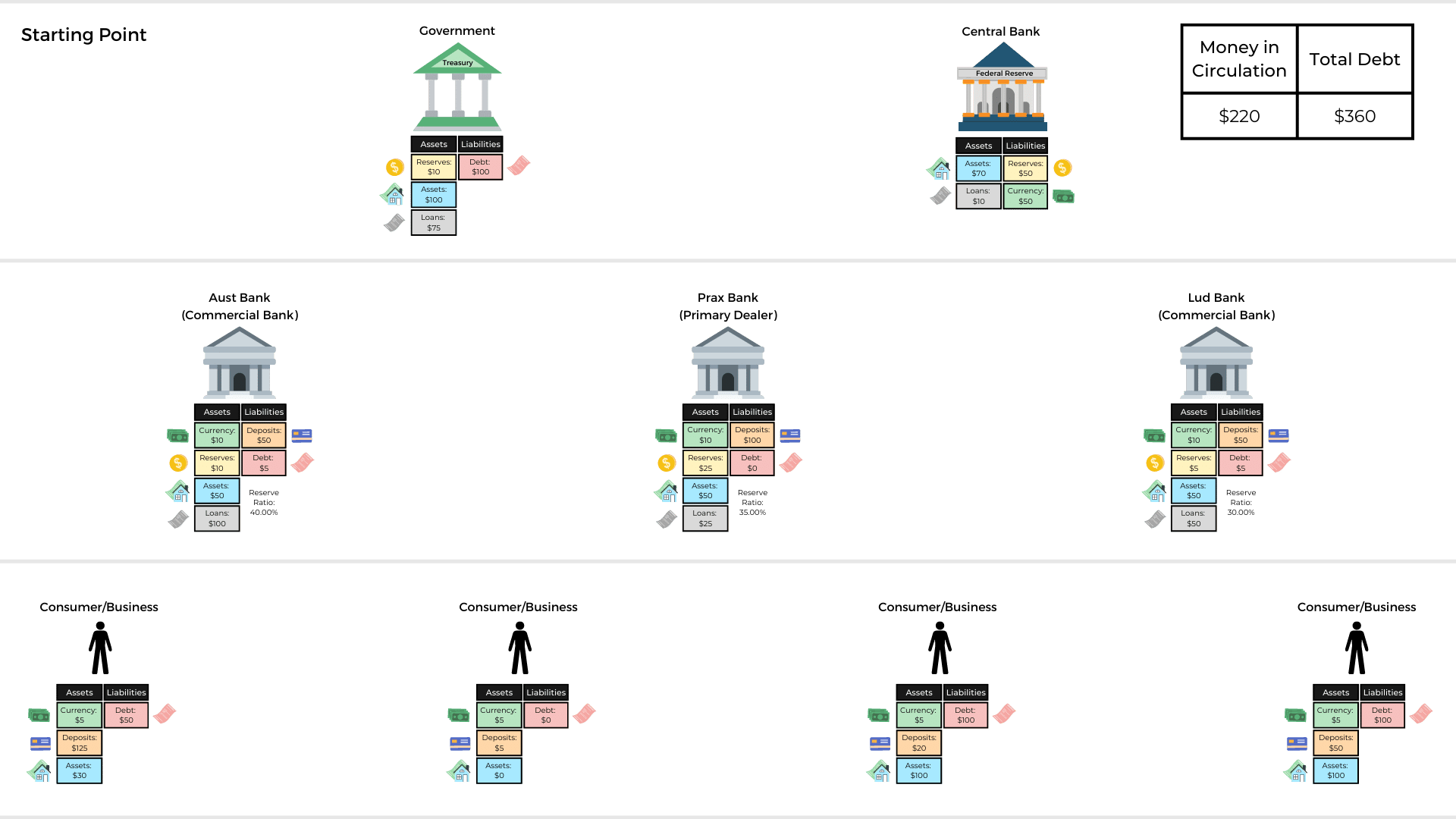 The model emphasizes five steps of the money creation process:

Goethe described double-entry bookkeeping as “one of the most beautiful discoveries of the human spirit.” Who would guess such high praise for a dry method of accounting would come from someone who dedicated his life to poetry, aesthetics, and literature? 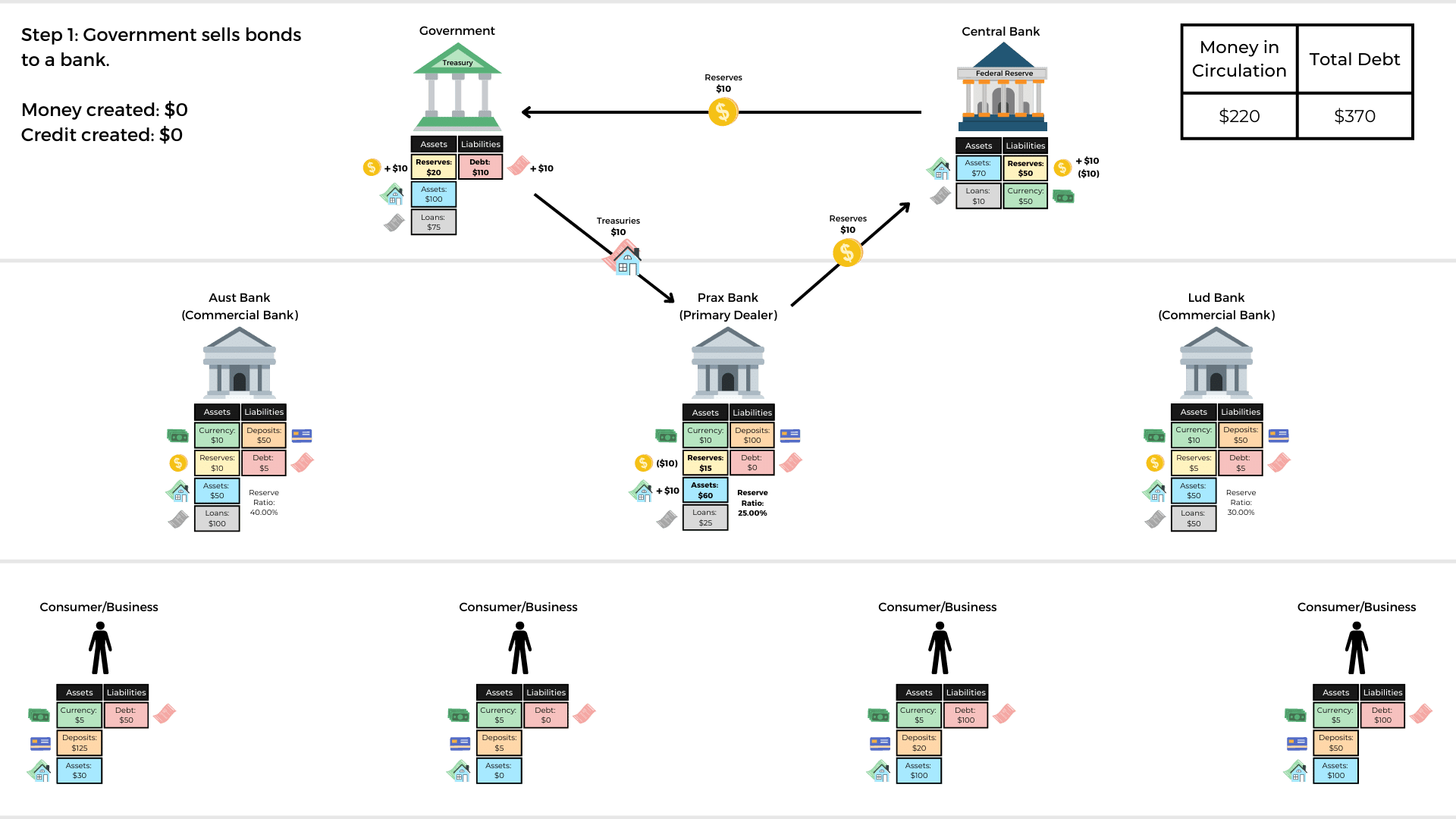 The Treasury only sells bonds to a special kind of commercial bank, known as a primary dealer. Wells Fargo, Bank of America, Morgan Stanley, and Deutsche Bank are all primary dealers. The government sells treasury securities at auction, where primary dealers make competitive bids. This creates an initial market for government bonds.

Why does the government sell bonds?

If government expenditures exceed tax revenues, they must cover the difference by selling bonds. Government borrowing is a sneaky form of taxation.

Government bonds allow current taxpayers to enjoy the benefits of public spending without having to pay taxes. The debt burden is simply pushed to future generations.

The government may send the newly borrowed money to Lockheed Martin or Boeing in exchange for new military aircraft, allocate it to the salary of a TSA agent, or use it to build roads, bridges, and public housing. 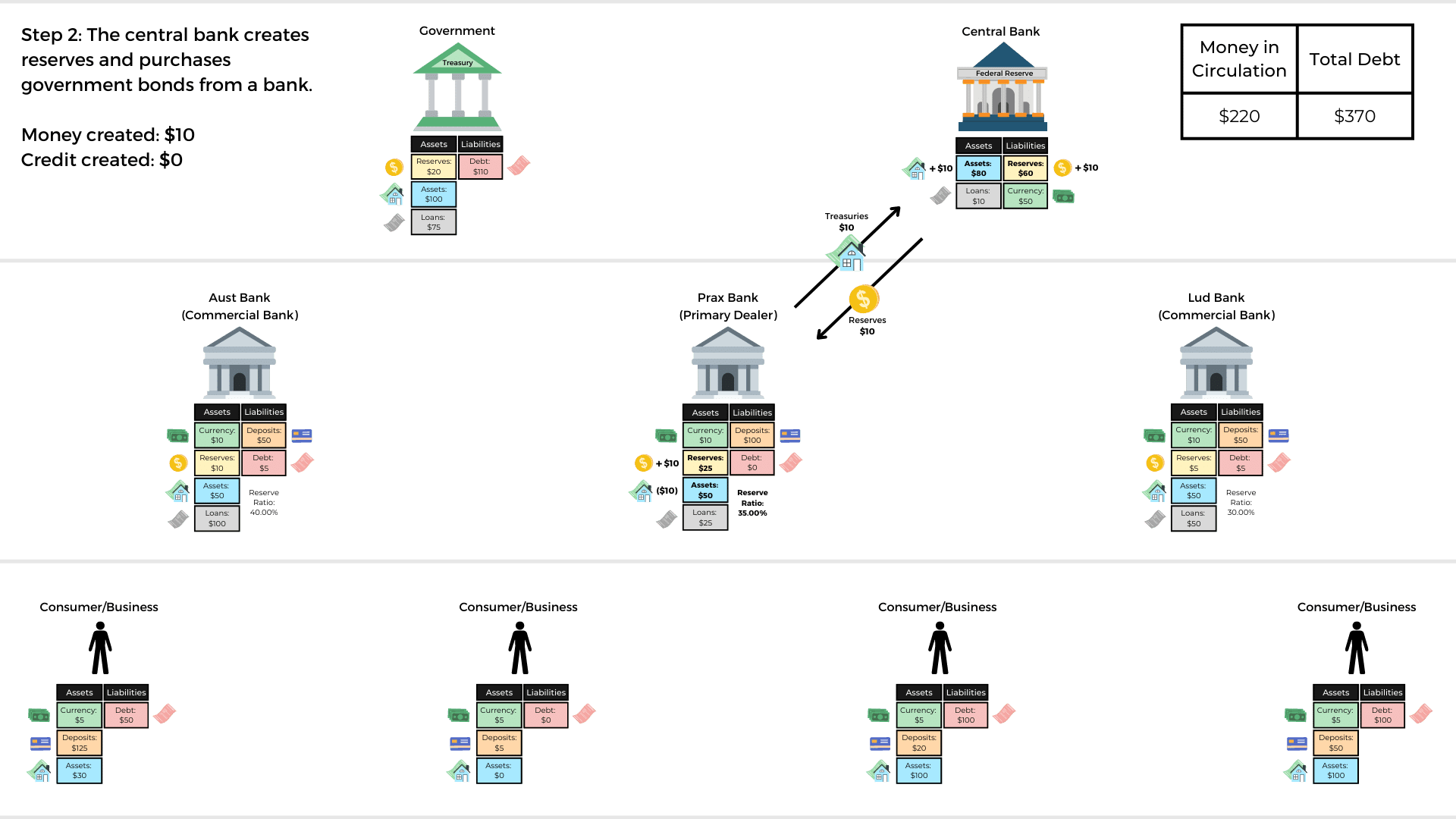 To purchase government securities in the open market, the Fed simply debits the new reserves to the primary dealer’s account.

New reserves are created, although no physical currency printing is required. The vast majority of modern money is created with the stroke of a keyboard.

Why doesn’t the Fed just buy government bonds directly from the Treasury?

Because it is not legal. The Federal Reserve Act states that the Fed is only allowed to purchase securities through the “open market.” Therefore, primary dealers must act as an intermediary for Fed asset purchases.

In recent decades, central bank asset purchases have exploded. In response to the ’08–’09 Global Financial Crisis, the Federal Reserve embarked on a controversial quantitative easing campaign, which flooded the banking system with trillions of dollars in reserves and created massive artificial demand for government securities.

Prior to the GFC, monetary policy focused on interest rates. That changed when interest rates hit zero in December 2008. To stimulate economic growth, the Fed had to resort to more extreme strategies.

Step 3: Bank lends money to a consumer or business. 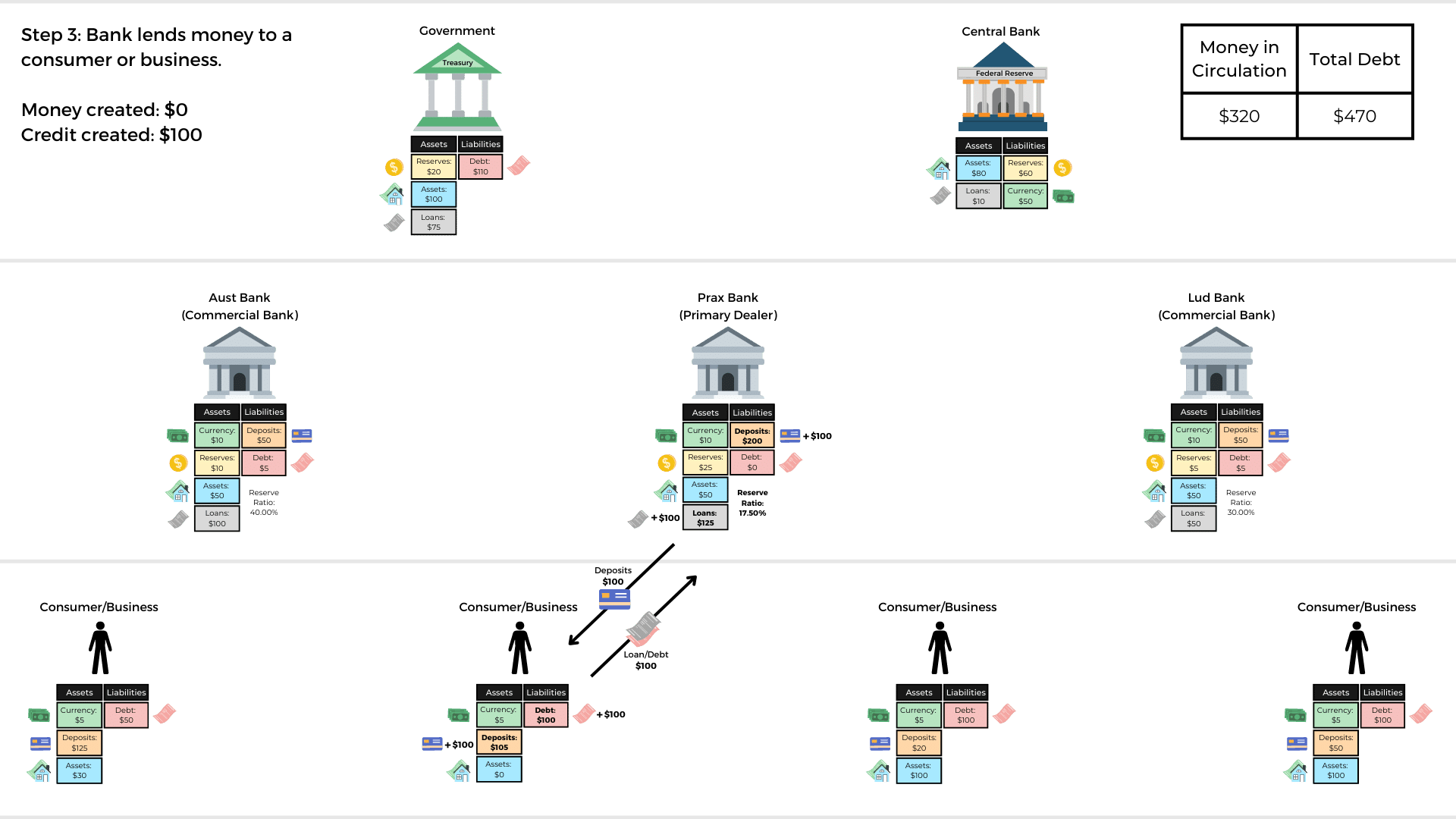 Consumers and businesses borrow money for mortgages, business loans, and other reasons. Notice the lending process increases the amount of money in circulation and total debt by an equivalent amount (in this case, $100).

When a commercial bank lends out money, they simultaneously create a loan and a deposit.

The Risks of Borrowed Money

This pattern may also lead to a debt crisis, where public and private borrowers eventually fail to find lenders willing to support their unquenchable thirst for credit. When the lending stops, borrowers can no longer pay back their loans. Borrowers suddenly default on their debt obligations, and credit starts evaporating from the economy.

It is important to note that bank loans are not limited by reserve requirements. Some economics textbooks model the credit creation process by showing that banks lend out a portion of deposits. For example, if a consumer deposits $100 in Prax Bank and the reserve requirement is 10%, Prax must keep $10 in reserves and can lend out $90. That $90 is deposited at another bank, which turns around and lends out $81, and then $72.90, and so on.

This illustration is not necessarily wrong, but gives the wrong impression of the real world. Deposits do not create loans; loans create deposits.

Banks give out loans first and cover their reserve obligations later.

When a borrower seeks a loan, the bank nearly always lends the money, no matter their reserve balance. If the new loan increases deposits beyond the legal limit, the bank simply borrows reserves to cover the difference. Banks prefer to borrow reserves from other commercial banks (see step 5), but they may also borrow from the central bank.

Banks can basically loan as much money as they want. They do have factors that limit credit creation, but reserve requirements are not one of them. When it comes to loan creation, banks are primarily concerned with staying profitable and maintaining capital requirements. Capital requirements are regulations designed to lower the total risk of banks’ asset holdings and make sure they have enough liquid capital to cover their obligations. A bank is not permitted to go out and lend to a bunch of money to super-risky borrowers for a 30% interest rate because this would substantially increase the risk of default. 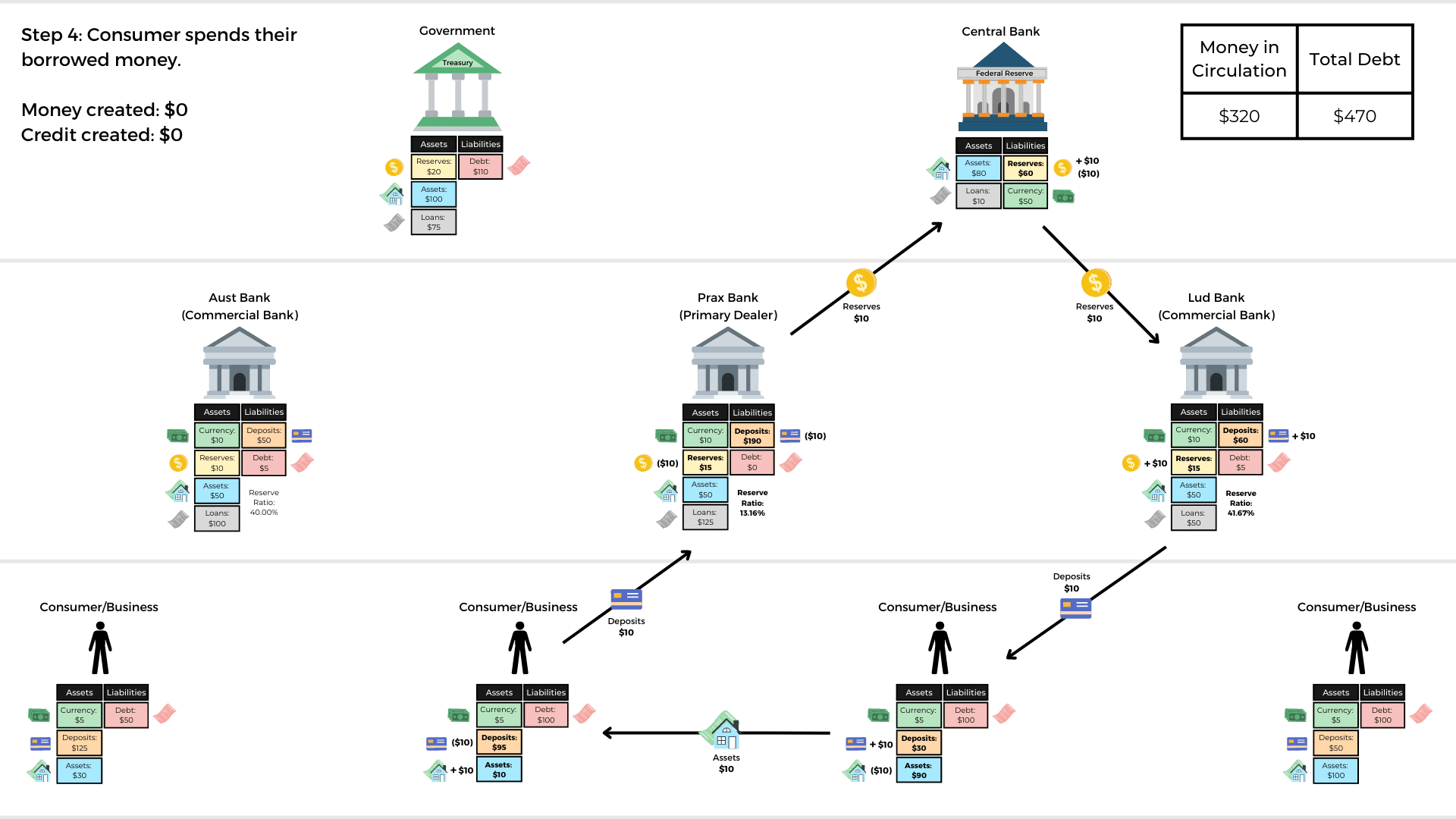 The consumer can transfer their deposits to another consumer or business via check, bank wire, or ACH.

The transaction happens between a buyer and a seller, although the funds are actually exchanged between two banks. When the buyer spends their deposits, the buyer’s bank (Prax Bank) transfers the deposits to the seller’s bank (Lud Bank).

If, through this process, Prax Bank’s reserve account goes negative, the Federal Reserve will automatically lend it enough reserves to cover the transaction. Prax Bank must then borrow reserves at the end of the day to clear the overdraft. Prax Bank will most likely borrow these funds from another commercial bank (see step 5).

In this step, Lud Bank’s deposits and reserves increased by the same amount. This increased Lud’s reserve ratio to 41.67%, which means the bank has plenty of excess reserves to back new loans.

However, as we discussed in step 3, this is typically not the motivation for issuing loans. If people want loans, banks give them. That’s how banks make money. Reserve requirements are an afterthought, because they can simply borrow reserves from other commercial banks or the Fed if they need them to to meet legal requirements.

Banks don’t really need consumer deposits and corresponding reserves. So why do they seek them out?

Banks are happy to take your deposits because consumer deposits are the cheapest way to increase reserves. 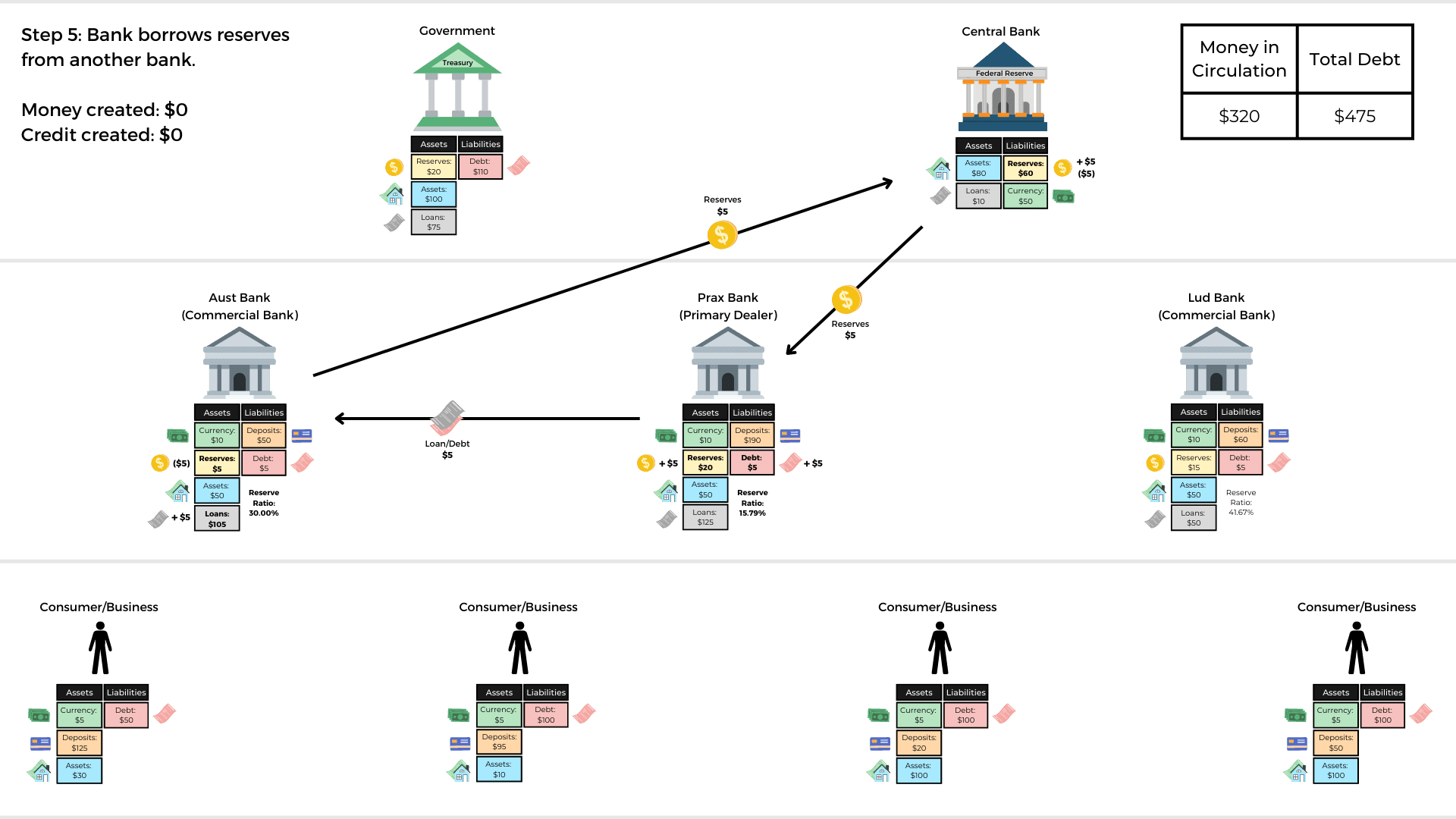 Let’s assume the required reserve ratio is 15%. Prax bank must find a way to increase reserves to stay compliant.

This happens through the interbank lending market.

The rate at which commercial banks lend to each other is known as the federal funds rate. When we say “the Fed is raising rates,” we mean they are raising their target for the federal funds rate. This rate is not written into law, but rather a target that the Fed maintains through monetary policy. If the actual lending rate between banks rises above the Fed’s target, they will increase the supply of bank reserves. This lowers interest rates by making interbank loans easier to find. Likewise, if the interbank lending rate falls below the Fed’s target, they will decrease the supply of bank reserves, therefore raising interest rates.

The Fed primarily controls the total supply of reserves through open market operations.

Borrowing from the Fed

If Prax Bank is unable to borrow the necessary reserves from another commercial bank, it may borrow them from the central bank. One of the Fed’s duties is to serve as a “lender of last resort.”

The Fed loans money to commercial banks through a lending facility known as the “discount window.” Central bank lending increases drastically during times of financial stress, such as the GFC and COVID-19. The discount window is designed to maintain liquidity and stability in the nation’s banking system.

The Impact of Money Creation

Our model economy started with $220 in circulation and $360 in total debt.

By the end of step five, the money supply had increased by $100. Only $10 can be attributed to the central bank; the other $90 was created through commercial bank lending.

It is important to note that these five steps do not always occur in the order outlined above. In the real world, the steps occur simultaneously, millions of times across the entire economy.

This commentary comes from Vaulted’s internal team of researchers and technical experts. Vaulted gives modern investors access to physical gold ownership at the best cost structure in the industry. With personal advising from industry experts and access to premier precious metals strategies, Vaulted is the key to life-long financial prosperity. Start protecting your portfolio today.