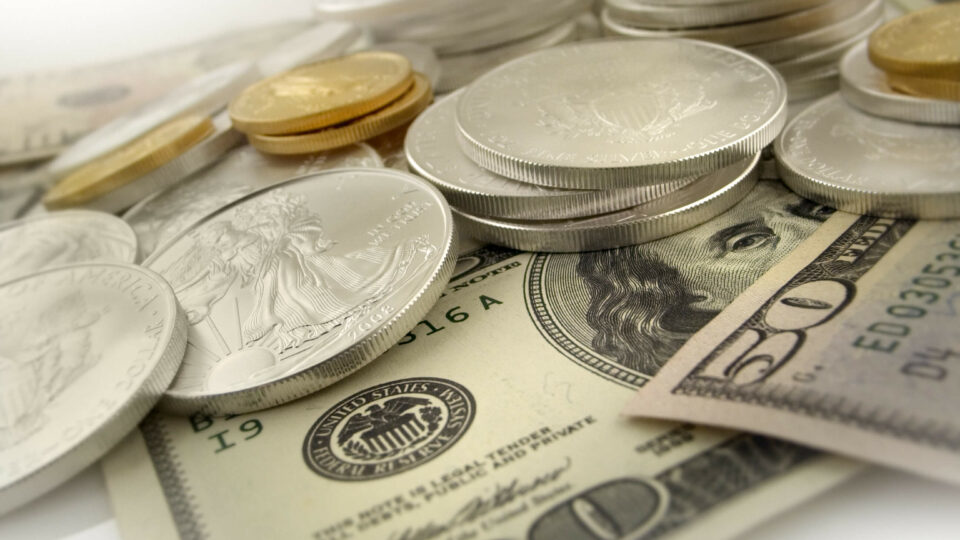 The US dollar is showing weakness as compounding pressures of devaluation rack the currency. Gold is taking advantage of this weakness and moving higher.

After several failed attempts to break above $1,760 over the last couple of months, gold has finally broken out of its rising channel. The price now sits at $1,763, marking a very important price increase that could be the first of a new wave of bullish action.

So far, the double bounce at $1,685 has held. Gold’s recent channel highs occurred at the end of February, March 16th, and April 11th, each falling short of $1,760. The lows occurred on March 8th and March 30th. The price finally broke through the resistance line yesterday, although we could still see gold turn around and retest the $1,685 level.

Gold bulls would like to see the price climb toward $1,800 before bouncing off the $1,760 range and beginning an upward stair-step pattern. 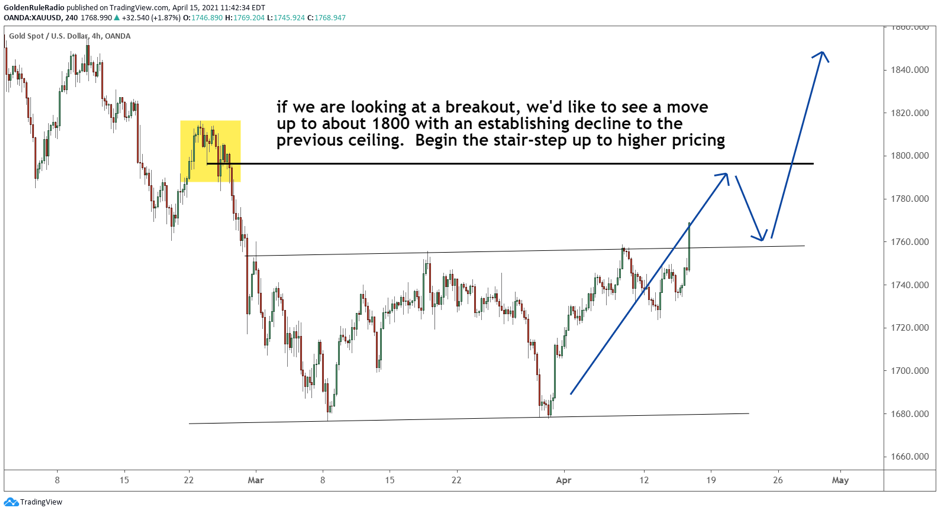 The other flagship precious metals – silver, platinum, and palladium – are all taking a breath of fresh air on the upside along with gold. The Dow Jones Industrial Average, one of the primary measures of stock market strength, also recently broke above its rising trendline and continues to put in all-time highs. Basically, it looks like there are good days ahead for anyone who has any money invested anywhere. 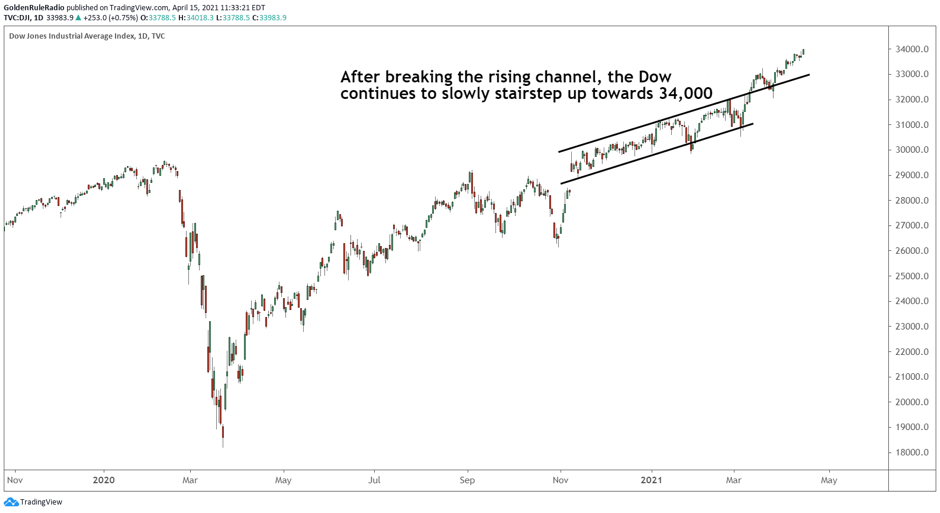 When the dollar is weak, everything else is strong

There is one corner of the market not looking so rosy, and that is the US dollar. The dollar index had a surprisingly strong start to 2021, outperforming most other major currencies and approaching 94 before turning back around this month.

Inflationary pressures are buoying every corner of the market, except for the one asset they can’t help, and that is the US dollar. The dollar has a unique impact on global financial markets. When more dollars are injected into the system, the price of everything goes up. It is easy to confuse excess liquidity with fundamental economic growth – it looks like the current financial markets are getting a lot of both.

Ultra-low interest rates, rising inflation, record monetary spending, massive budget deficits, and record debt levels are starting to hurt the value of the US dollar. Only so much money can be printed without consequences. The currency has evaded the inevitable for months, but the downward pressures are mounting.

The 12-month rolling average of inflation jumped from 1.7% to almost 2.7% in one month. 1% in one month? That is a scary statistic. Here’s why it happened:

The Consumer Price Index (CPI) measures the overall price change of consumer goods. It is the primary tool used to indicate inflation rates. CPI is measured on a 12-month rolling average. March 2020 was a very deflationary month during the initial shock of COVID-19. The economy nearly came to a complete stop, so the CPI did not register significant price increases.

The rapid recovery from COVID-19 and the trillions of dollars flooded into the markets have since pushed consumer prices through the roof, but March 2020 has been pulling the CPI down significantly over the last year. The CPI rolling average has moved past March 2020, so now the CPI more accurately reflects the inflationary impact of all the excess liquidity the federal government has pumped into the system over the last year.

The same is going to happen in April and May, because April and May 2020 were also relatively deflationary months. We will likely see 3% on the CPI, which could be a very unpleasant number for financial players to digest. No one likes inflation.

The Producer Price Index (PPI) is also up 1% in March – a major shock considering PPI was expected to rise by only 0.4%. March’s PPI increase doubled February’s 0.5% increase. The recent increases in the PPI have taken the index to the highest levels since 2008. The Final Demand Index also rose to 4.2%, the largest increase since 2011.

The impact of a declining dollar

During a long-term decline in the dollar, investors have less and less incentive to buy treasury bills and save money. So, the real thing keeping our economy afloat is the velocity of money or the speed at which money changes hands. When money is cheap (low-interest rates) and everyone has extra (fiscal stimulus), a lot gets thrown around. The impact of these pressures can be easily confused with economic growth.

For example, in the last 5 months, more money has flooded into the stock market than in the previous 12 years combined. Investors are borrowing against their retirement portfolios at the fastest rate since 2007. We are seeing a decline in the value of the US dollar because investors cannot make a safe return to the dollar when interest rates are near zero.

Additionally, the dollar’s share of global reserves has declined to a 25-year low, which means central banks all over the world are decreasing their allocation. The US dollar currently makes up about 60% of all currency reserves globally. Below is a chart from Bloomberg that shows this trend: 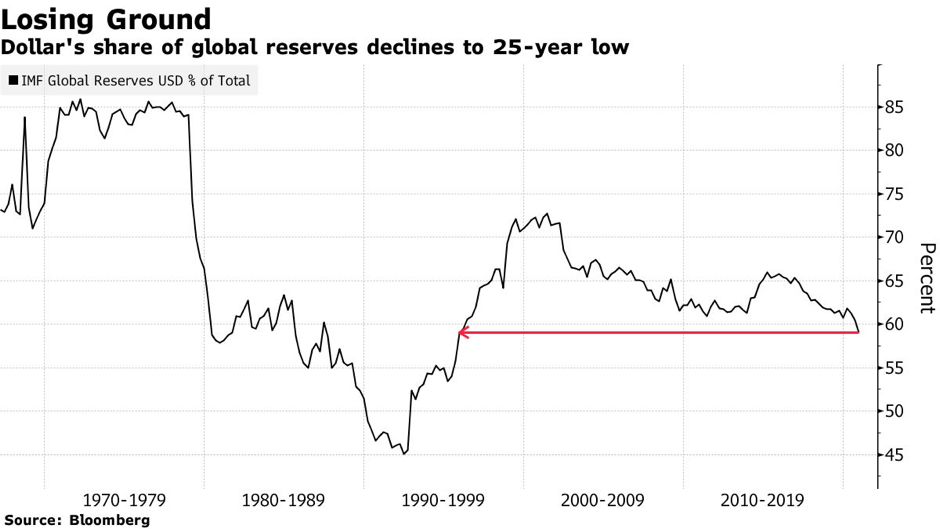 The US dollar has a strong foothold as the global reserve currency, although central banks around the world seem to be losing trust in the US currency. Domestically, the value of the dollar has been declining for the last year. And yet, the Federal Reserve’s only play is to fix economic problems by printing more of these dollars.
This is exactly why you buy gold.

Gold is a hedge against currency devaluation and inflation. Gold perpetually maintains its purchasing power, so it is pushed upward when the underlying fiat currency loses value. The metal has vastly outperformed all major fiat currencies over the last 50 years.

Typically, gold does not rise to the same degree that the dollar value falls. The market cap of all US dollars is much larger than gold’s market cap, which means gold can rise 20%, 25%, or even 30% when the dollar drops by 10%. 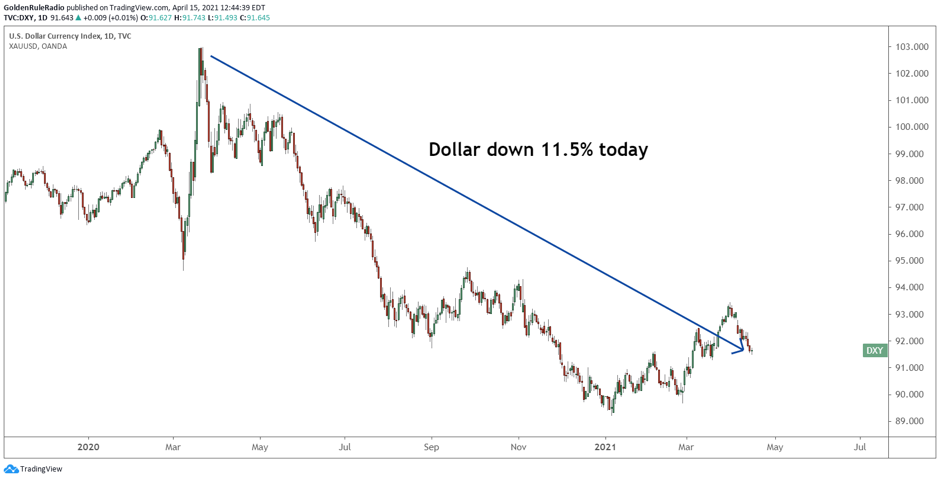 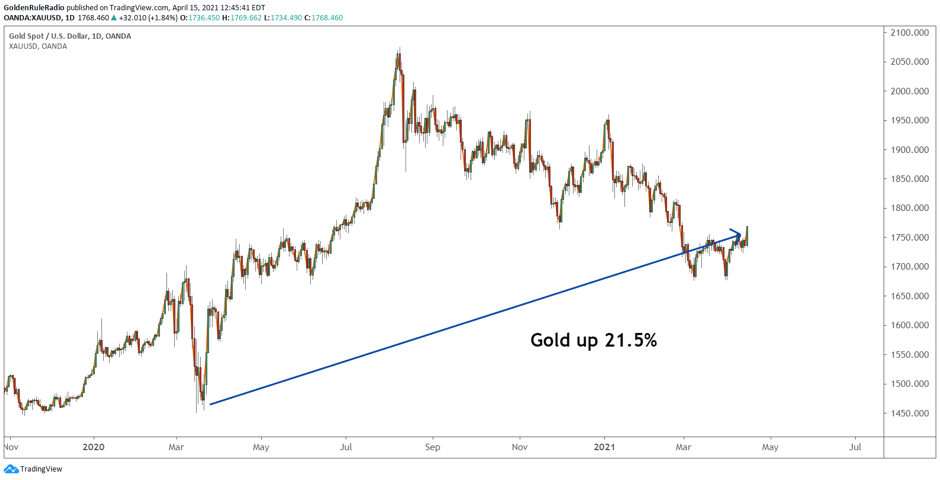 If you are looking for the best way to enter the physical gold market, Vaulted is the answer. Vaulted is democratizing access to physical gold ownership, bringing the oldest asset in human history into the hands of the 21st-century investor.

With so much unpredictability and risk in the current financial markets, gold’s value proposition increases every day. Replace your cash with the world’s most trusted physical currency, protect yourself from the devastating effects of inflation, and take control of your financial future.

Watch Golden Rule Radio to understand more of what’s in store for gold and other precious metals in 2021.