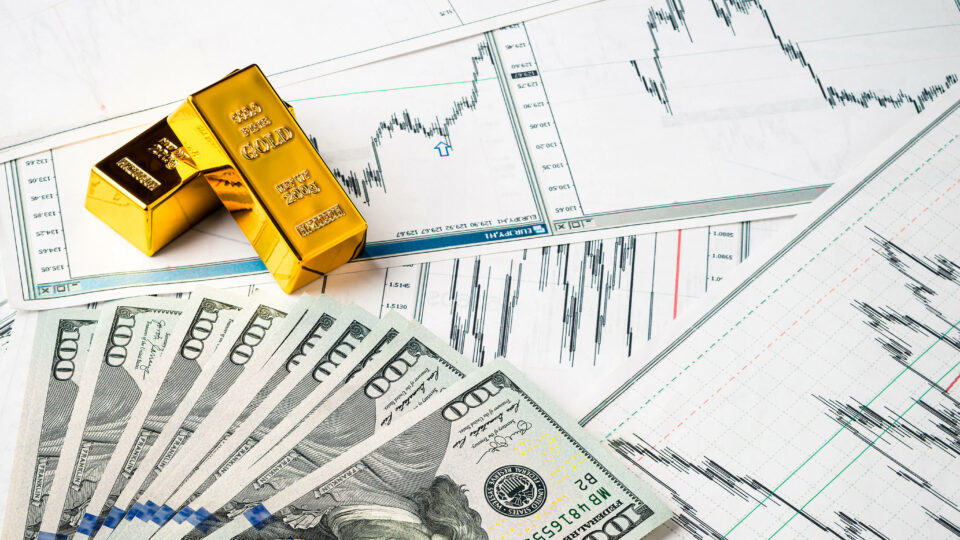 Gold made an exciting jump above a key resistance level today. Unprecedented money supply growth in the United States is a boon for commodities prices.

Gold touched the $1,800 ceiling four or five times in the last 20 days. Today, the metal gathered all the might it could muster and made the incredibly exciting break above this ceiling. Gold is gaining bullish momentum but has plenty of important tests approaching.

The following factors are some of the biggest drivers of gold’s recent performance: 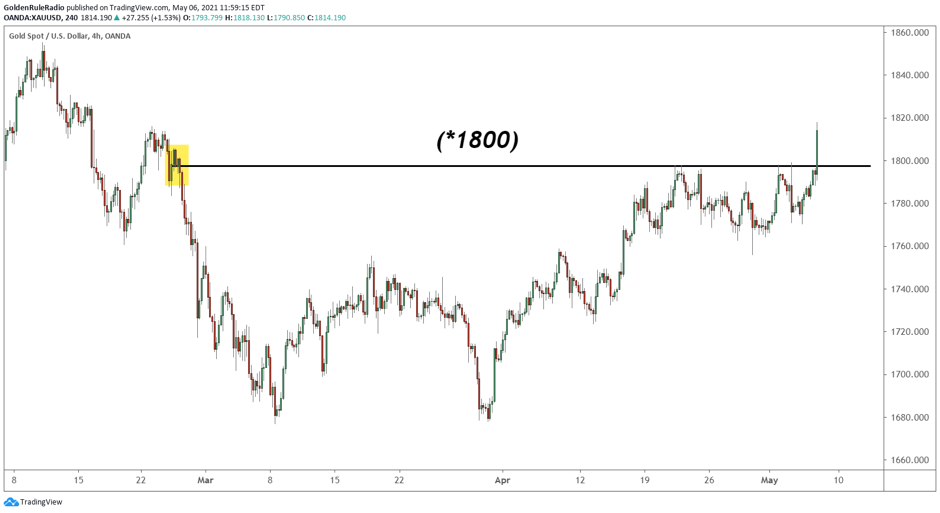 The metal has looked long-term bullish for several years now, but 2021 has been a struggle as investor sentiment all but evaporated while other asset classes overshadowed gold. Times of low investor sentiment have historically been the best times to enter the market. Gold is once again looking short-term bullish. 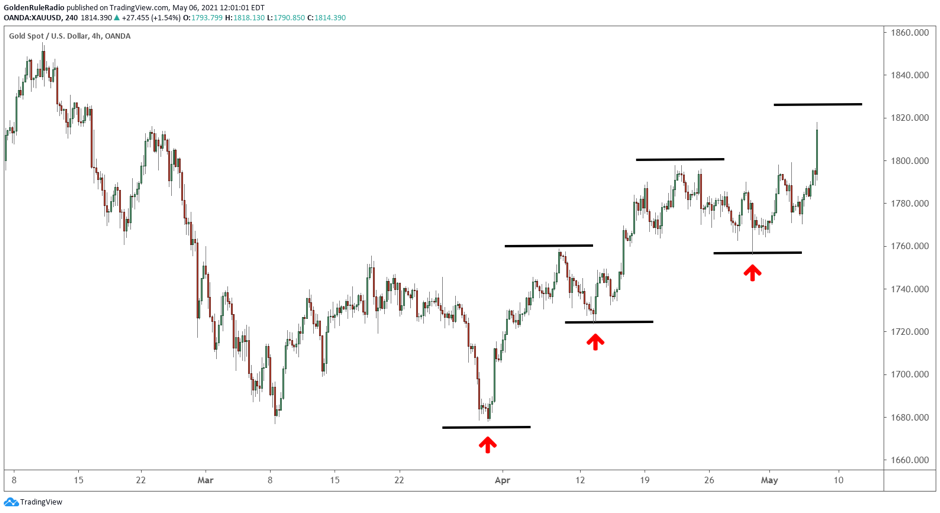 We would like to see the price continue to stair step up and test the previous shelf we put in last summer, right after gold reached all-time highs. This level lies right around $1,960. After that, we can start discussing new all-time highs. 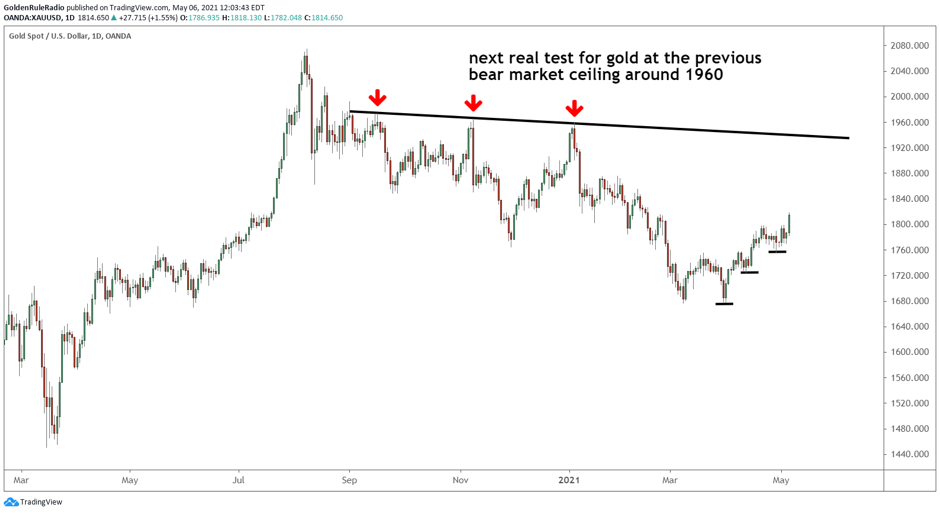 Most economic fundamentals support the bullish case rather than the bearish case. Lower prices are always possible, but right now we are taking every opportunity to buy before the price continues higher.

In the case that gold does turn around and drop again, we will be watching the $1,680 floor very closely. The $1,680 level corresponds with the long-term .382 Fibonacci retracement level, the most shallow level you would expect during a long-term correction. Gold could still remain in a bull market even if it reaches lower fib levels, such as the 50% correction line around $1,567 or even the .618 fib around $1,448.

Commodities poke their head above water

Today’s gold jump came alongside a very aggressive move in the broader commodities market. The Bloomberg Commodities Index, which tracks a basket of physical commodities that are significant to the global economy, is up 61% since March 2020.

The index just broke above its bear market ceiling, a strong indicator that commodities prices will continue to climb for the foreseeable future. The index touched this ceiling five times since mid-2015, each time failing to break above.

This move is similar to gold’s major breakout in 2019. Gold traded in a bear market channel for six years, from May 2013 all the way to June 2019. In early July 2019, gold finally broke above the bear market ceiling and rose 47% in one year to its all-time high. The Bloomberg Commodities Index might be following the same trend two years later. 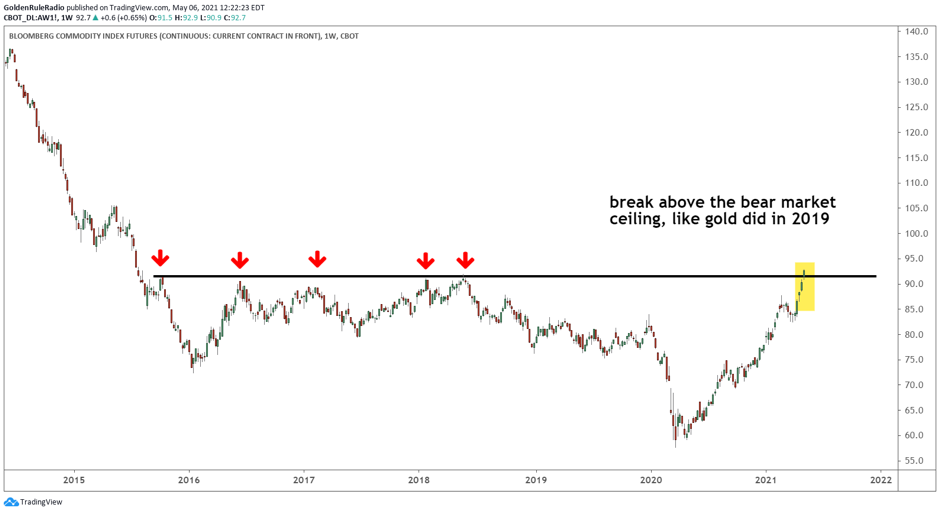 What does this mean?

A rising index is a good sign for commodities investors, but also reflects worrying signs of inflation. Rising commodities prices put pressure on businesses, who are eventually forced to pass those costs onto consumers. Consumers haven’t felt the full impact of rising prices because most people aren’t buying 1000 bushels of corn or live cattle on the futures market.

It is only a matter of time before inflation makes its way into the goods and services we buy every day. Fortunately, you can ride the wave of higher prices instead of just falling victim to them. Investing in gold is perhaps the most stable and proven way to do so.

Inflation can have a devastating impact on the economy, but decades of stable prices have pushed the threat further and further out of central bankers’ and investors’ minds. This complacency has allowed inflationary pressures to overtake monetary and fiscal policy in the United States, and it looks like prices are now due for an overcorrection to the upside.

Will the economy overheat to the point of hyperinflation as we saw in the 1970s? Let’s hope not. Central bankers say no, but the charts keep showing reasons to hedge against the risk.

One way to protect your portfolio against both extreme inflation and extreme deflation is by holding physical gold. Gold perpetually holds its purchasing power, making it the best insurance policy against a declining U.S. dollar.

In the past, owning physical gold was extremely expensive and complicated. Vaulted has changed that by cutting out 70% of the supply chain and bringing cutting-edge technology to an age-old industry. If you want lower costs and higher returns alongside the peace of mind that comes with gold ownership, give Vaulted a try.

Thanks for reading, and happy investing!