Is the U.S. dollar strong, or is everything else just weak? - Vaulted 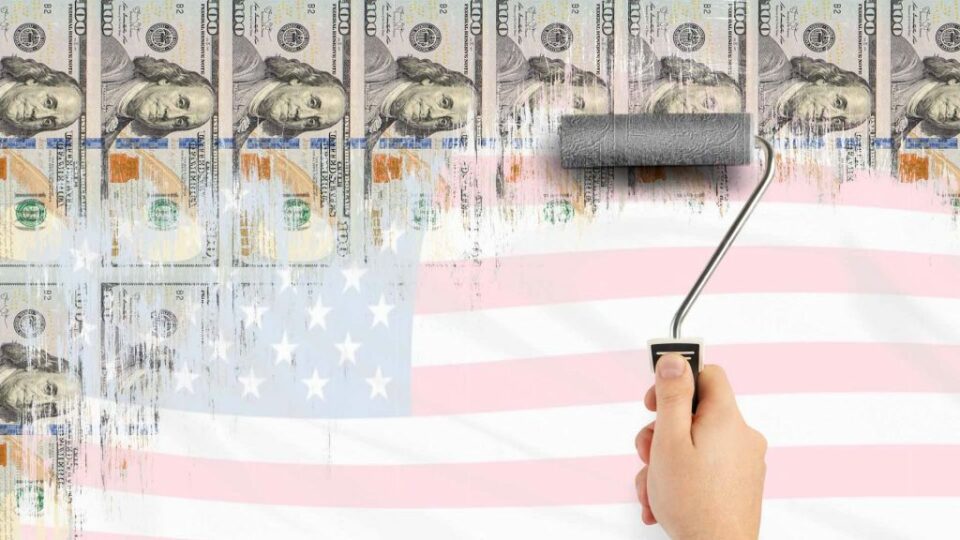 Once again, gold is stuck below $1,800/oz as the U.S. dollar index rises, the Fed takes a hawkish turn, and geopolitical pressures build across the Eurozone and Asia.

Gold jumps above its Point of Control

Gold jumped more than $20 today after bouncing off the 50% retracement line. The 50% line has provided support for the gold price several times in 2021, as the green arrows indicate on the chart below.

If you have been following the gold market over the last year, you know how sticky the $1,800 price level has been. The blue and yellow histogram on the chart below shows gold’s volume profile. The volume profile is an indicator of trading activity around certain price levels within a certain time period.

The longer the bar, the more dominant the price level. The longest bar, known as the Point of Control (POC), shows where the most trading activity has occurred in 2021. The POC lies at $1,784.

Today’s jump put gold above the point of control, but the price has not yet surpassed $1,800/oz. Gold faces several significant headwinds moving into 2022, such as a strengthening U.S. dollar and the potential for rising interest rates.

Gold and the dollar index

The U.S. Dollar Currency Index (DXY) measures the dollar against a basket of fiat currencies (Euro, Swiss Franc, Japanese Yen, Canadian dollar, British pound, and Swedish Krona). When the index is rising, the dollar is gaining purchasing power against those currencies.

A rising dollar puts pressure on gold because gold is priced in U.S. dollars on all major exchanges. When the DXY goes up, gold gets more expensive for foreign investors. The dollar also competes with gold as a reserve currency for foreign central banks. The U.S. dollar is known as the safest fiat currency, although gold has been taking its share of global reserves for decades. For example, Russia and China have been exchanging their U.S. dollar reserves for gold recently in an attempt to “de-dollarize” their economies and reduce risk.

Add those trends on top of skyrocketing inflation in the United States, you would expect a weakening dollar. But that has not been the case in 2021. The dollar index has had a great year.

When we add gold on top of the DXY chart, we see how strength and weakness in the U.S. dollar correlates with gold’s performance. During the dollar’s 8.7% rise in 2021, gold has fallen 8.3%.

Why is the dollar rising?

Despite the unprecedented money printing since the onset of the pandemic, people seem to trust the U.S. dollar. Investors, both foreign and domestic, believe the Federal Reserve will reign in currency devaluation (especially following Jerome Powell’s sudden change of heart on inflation). News flash: it’s not transitory.

Although, perhaps it would be more accurate to say investors just trust the European Central Bank (and others) less than the Fed. The ECB’s policies have been just as extreme, multiplying the supply of money in the Eurozone to make sure everyone is drowning in cash.

Eurozone banks are exchanging those euros for dollars, therefore boosting the dollar’s strength against the euro. You might be correct in saying the Fed’s monetary policies have been irresponsible in recent years, but no more irresponsible that other big banks’.

Fortunately, wide-spread monetary mismanagement will ultimately serve as gold’s greatest tailwind. Right now, however, it is doing the opposite.

China’s Evergrande and the Turkish Lira

Both these topics deserve entire articles, but we will mention them here while we are on the topic of geopolitical strife. Evergrande, one of China’s largest property developers, finally missed its payments on some U.S. dollar bonds. Some are worried Evergrande’s potential default could trigger a 2008-style global collapse, but the jury is still out.

This year, Turkey has been a microcosm of monetary mismanagement. The Turkish lira has lost half of its value in 2021, and inflation shows no signs of slowing down. Turkish citizens are desperately trying to get a hold of safer assets such as U.S. dollars and gold as the nation’s economy slides into ruin.

The culprit? Turkish President Recep Tayyip Erdogan’s insistence on dovish policies such as ultra-low interest rates. Sound familiar? Unfortunately for Turkish citizens, the Lira does not have the luxury of the “global reserve currency” status like the U.S. dollar.

The Consumer Price Index hit a 40-year high! When you look at a 50-year chart of inflation, it is hard not to see the similarities between now and the 1970’s spike. The green sections on the chart below show U.S. recessions.

Let’s not forget: the Bureau of Labor Statistics changes the CPI calculation methodology all the time. If inflation were still calculated like Volcker calculated it in the 70’s, we would be well into the double digits.

If you suggested CPI would surpass 6.8% by the end of 2021 a year ago, you would have been written off as insane. Makes you wonder what the next few years could bring!

Financial Times: The return of inflation: crunch time for the European Central Bank