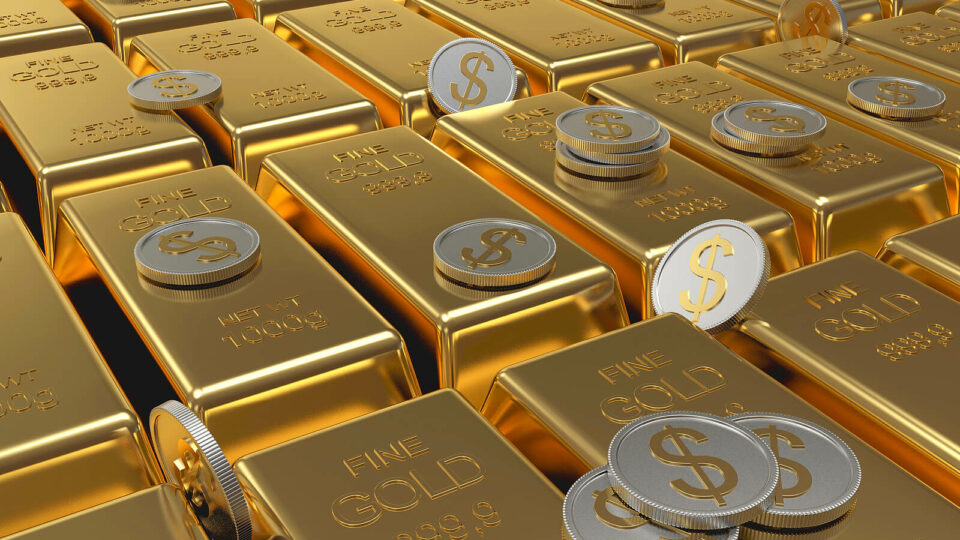 The price of gold has tracked the rapid expansion of money supply throughout history, both in the United States and globally. As M2 continues its long-term parabolic growth, so will gold.

Precious metals are unlike any other asset class. Rather than setting its own market based on earnings and company performance (like a stock), gold exclusively reacts to external price drivers in the economy.

Gold does not pay a dividend or an interest rate, which many investors see as a weakness. However, the lack of counterparty risk is actually one of gold’s greatest strengths. Gold will never sell off in response to missed earnings or a reduction in dividend payments. Gold does not have a management team responsible for ensuring the asset’s growth. Gold cannot default on its debt payments.

The yellow metal is driven instead by external economic factors. These factors have heavily favored gold for the past twenty years and show no signs of slowing down. Money supply growth has gone parabolic along with global debt levels, which will inevitably lead investors to the world’s oldest and most trusted currency to protect their purchasing power.

Recovering from the flash crash

Gold has regained most of its recent “flash crash” losses but has yet to rise above the key $1,800 level. Every time the price is pulled down by higher bond yields, higher real interest rates, and an improved economic outlook, it gets pushed back up by high inflation numbers, poor economic data, and geopolitical unrest. 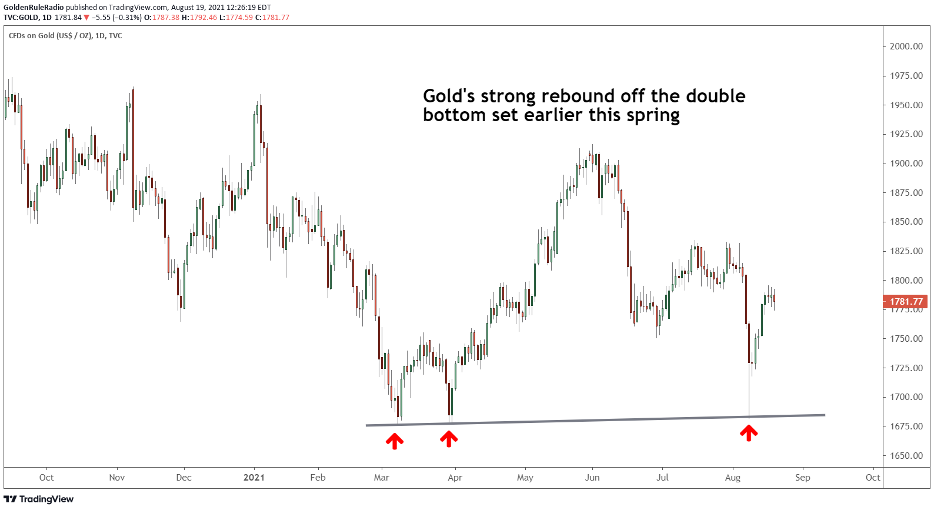 After rebounding last week, gold bumped against a new short-term ceiling around $1,790, that was serving as a floor prior to the flash crash. We would like to see gold take a little step down before breaking above this short-term ceiling and beginning its climb toward other previous ceilings. 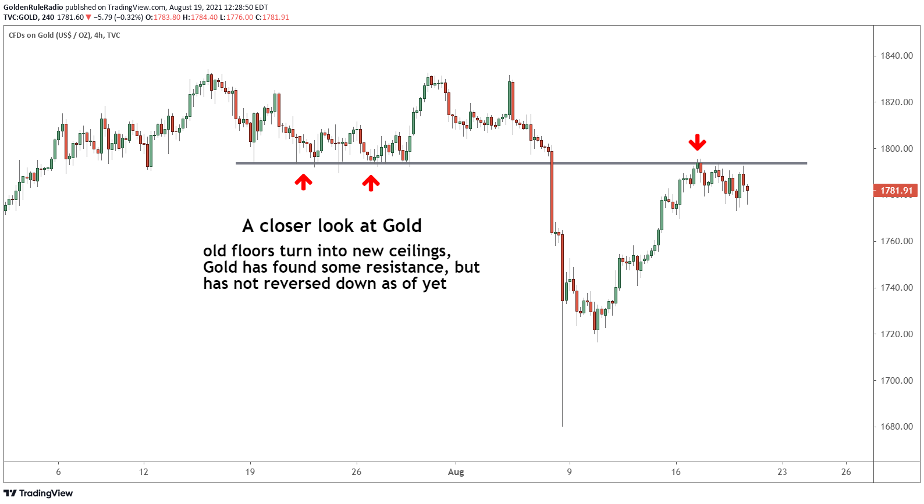 The relationship between gold and money supply

Central banks increase the money supply to stimulate economic growth. This can be dangerous because the theory of supply and demand tells us that as money supply increases, the cost of goods and services rises as well. 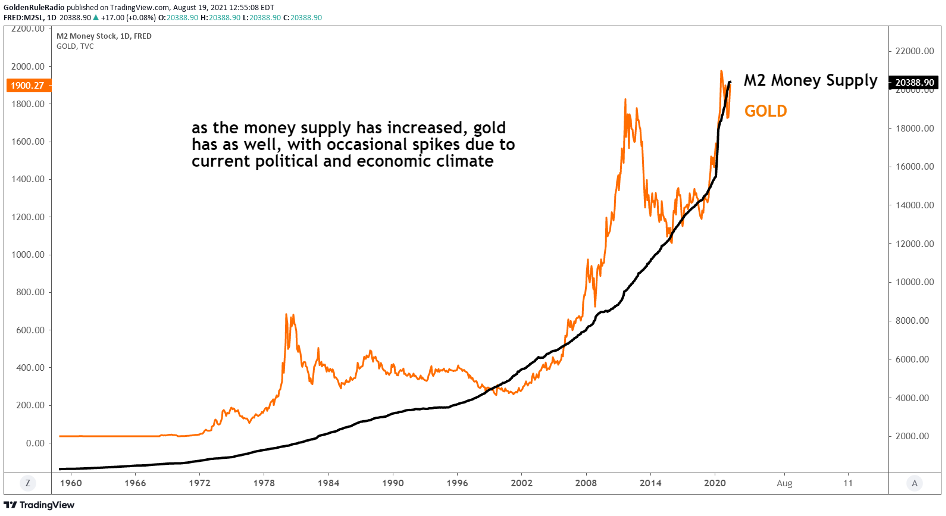 Central banks’ attitudes toward money supply have changed drastically in recent years – not just in the United States, but throughout the world. Nixon ended the gold window in 1971, officially making the U.S. Dollar an unbacked fiat currency. Since that time, the United States has seen an exponential increase in the money supply and a severe devaluation of the nation’s currency.

Fortunately for gold investors, these parabolic money supply increases are far from over. In fact, central banks around the world are actively pursuing looser monetary policies that allow for more printing and more spending. 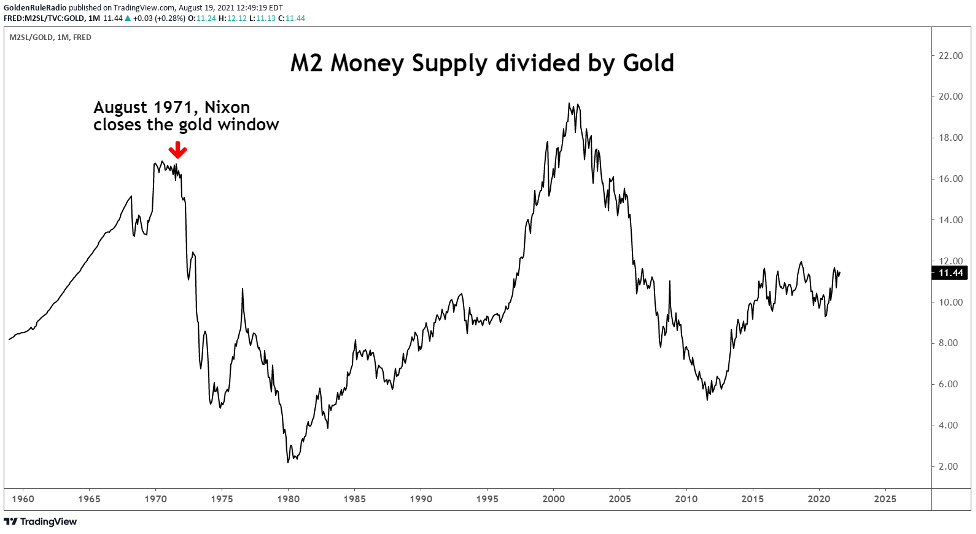 The M2/gold ratio: gold has room to climb

As you can see on the chart above, gold bull markets tend to send the ratio on long declines (1971-1980, 2001-2011). However, the most recent bull market is different. Gold has been rising in parallel with M2 money supply, so the ratio has been sideways since 2016.

This could indicate that gold has much further to climb during this bull market. Gold bull markets tend to vastly outperform money supply growth, which we have not yet seen. 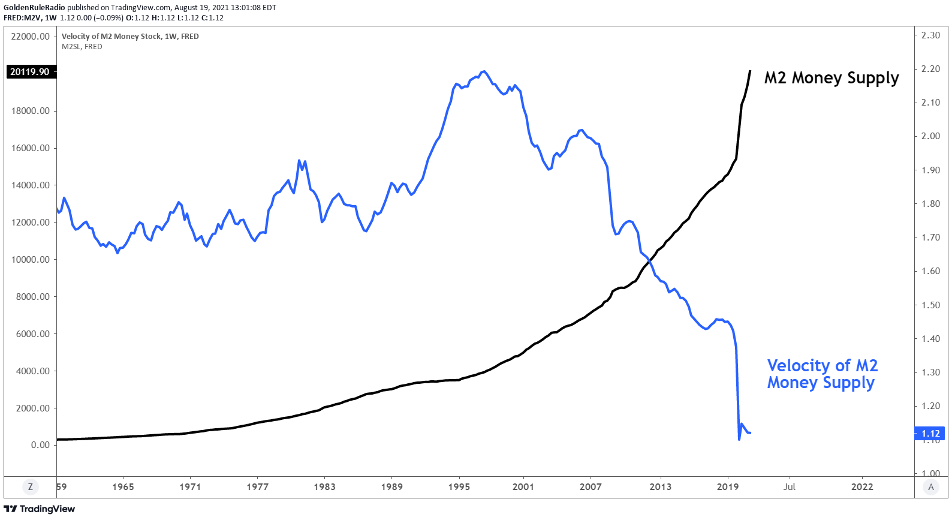 How far can velocity fall?

The relationship between M2 supply and velocity is also very interesting to examine. Since 2007, the velocity of M2 has been falling off a cliff. Velocity measures how many times a single dollar is used to purchase goods or services.

Low velocity means that the money sitting in money market accounts, checking accounts, and mutual funds isn’t generating economic activity. As velocity has decreased, the Fed has been forced to inject more and more cash into the system to generate the same economic boost.

The question is, will velocity ever start to rise? If velocity were to return to its historical averages, trillions of dollars of dormant money would start circulating at breakneck speed, overheating the economy and causing rapid inflation. Financial markets would take a massive hit, although gold would likely be one of the sole benefactors.