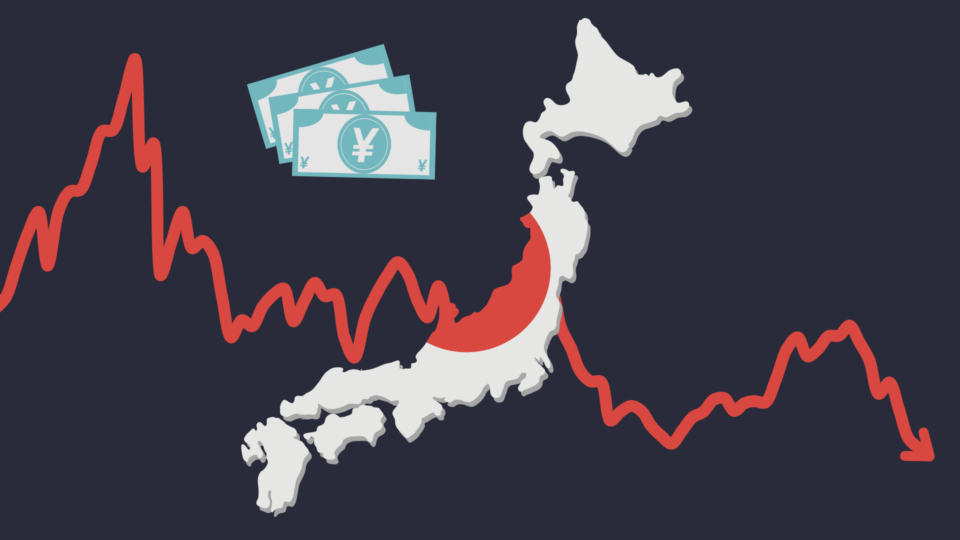 Throughout the 1980s, Japan’s economy soared past the rest of the world. The growth that once earned the envy of investors and economists now stands as a dire warning against debt, speculation, and easy money.

You are a 30-year-old, middle-class Japanese citizen, and you just got a job working for Mitsubishi Electric Corporation in Tokyo. Japan’s semiconductor industry has grown rapidly over the last decade, even challenging U.S. technological dominance.

You are thrilled to start your new job. The feeling of wealth and optimism fills the air. Japan’s economy and stock market are skyrocketing, and living standards have soared since the end of World War II. You now enjoy every modern luxury, including a stereo, an air conditioner, and your own Toyota Corolla.

You find a home in a suburb two hours outside of Tokyo. The house costs 70 million yen ($480,000), so you have to take out a loan from the bank to make the purchase. Taking on that much debt makes you nervous, but your colleagues assure you that the appreciating property would easily cover your financial commitments. You are in good company, as middle-class workers buy up nearby property in droves. In fact, housing prices in the area have tripled in the last 5 years. Better to purchase now instead of waiting for prices to double again!

Unfortunately, your home value would never double. The housing market would crash in 1991, and the Japanese economy would enter a period of deflation called “the lost decade.” Twenty years later, your home is valued at 44 million yen, and you are still saddled with debt. In hindsight, the 70 million yen price tag seems absurd, but how were you to know?

This is the story of Japan’s “lost decade,” perhaps the most egregious example of a modern central bank orchestrating a boom and bust cycle. Millions of Japanese citizens suffered the circumstances described above.

After World War II, Japan embarked on a period of radical economic and cultural change. Under the watchful eye of U.S. occupation, the Bank of Japan began transitioning toward modern central banking. In 1965, Japan issued its first government bonds, beginning a pile of debt that would soon grow to historic proportions. (As we all know, government debt never shrinks.)

Under a policy known as “window guidance,” the Bank of Japan printed money and instructed banks to lend it to certain industries. They not only controlled the quantity of money being pumped into the economy, but exactly where that money went.

Throughout the 1980s, the Bank of Japan increased the amount of money banks were responsible for lending. Banks had to meet their loan quotas, even if they couldn’t find any quality investment opportunities. As a result, banks handed their money over to riskier and riskier borrowers.

The money supply expanded rapidly, causing stock and housing prices to skyrocket. GDP chugged higher as Japan’s economy earned the envy of economists around the world. During this time, Japan entered a period of “financial liberalization,” which connected Japanese financial markets to international trade.

More money flowed in. Analysts and bankers praised Japan’s performance. A few raised red flags, but the Bank of Japan saw little reason to tighten monetary policy because inflation remained low. In fact, the Bank of Japan went the other direction. In 1986 and 1987, they sliced interest rates from 5.0% to 2.5%.

Excessive money printing and record-low interest rates compounded in a full-blown speculative bubble. Citizens bought stocks in a frenzy and took out massive loans to buy houses. Corporations borrowed money to speculate on stocks and real estate, making a fortune throughout the ‘80s.

In 1991, Japan’s total real estate value reached four times the value of all U.S. property at the time – a nation 25 times larger. Every square meter of urban land was valued at tens of millions of yen.

Just as governments, economists, and experts all over the world deemed the Japanese economy indestructible, everything changed. The Bank of Japan raised interest rates and reduced bank loans, finally tightening monetary policy after years of extreme credit expansion.

From January 1990 to July 1992, the Nikkei 225 stock index crashed 60%. Land prices also took a sharp turn, beginning a precipitous drop that would last for 20 years. In a matter of months, Japan’s miracle economy descended into chaos.

Japanese citizens, who had taken out massive loans to purchase expensive homes, were now saddled with exorbitant debt. Corporations, that had borrowed billions of yen from banks to speculate on stocks and housing, watched their investments evaporate.

Bank loans turned sour as borrowers failed to make payments. Many debts were backed by speculative assets, which were now worthless. Banks stopped loaning out money altogether, causing a sharp decline in the money supply.

The debt that had propelled so many investors to prosperity during the bubble years now crushed the Japanese economy. GDP per capita eventually stalled, despite the Bank of Japan’s efforts to stimulate economic growth.

An aging population exacerbated Japan’s deflation problem. The government tried everything to lift the economy out of its slump. Massive deficit spending, a banking system restructure, and public works projects all failed to recreate ‘80s-style growth.

To this day, economists debate the underlying causes of, and solutions for, Japan’s economic disaster. Unfortunately, popped bubbles are extremely difficult to reconstruct. One thing is clear: uncontrolled credit expansion never has a happy ending.

When the Bank of Japan forced money into the economy throughout the ‘80s, the money ended up allocated to unprofitable companies, risky borrowers, and other investments that did not deserve funding. These are known as malinvestments, a term coined by 19th-century Austrian economists.

When these investments go bad, they go bad fast. Just like Japan’s lost decade, the dot-com bubble and Great Financial Crisis in the United States began with uncontrolled credit expansion, which forced money into malinvestments and culminated in a destructive recession.

Hindsight makes bubbles easy to identify. Would you have taken the advice of top economists, stock analysts, and experienced investors in the 1980s? Many of them bought into the hype.

“Window guidance” is not the only way to generate uncontrolled credit expansion. Today, central banks artificially lower interest rates and engage in quantitative easing to reach the same ends. These strategies all constitute a transition from hard money to easy money.

After the Great Financial Crisis, central banks all over the world launched the most accommodative monetary policies in history. Imagine you are one of the millions of Japanese citizens still sitting under the crushing weight of public and private debt. What would you say about these decisions?